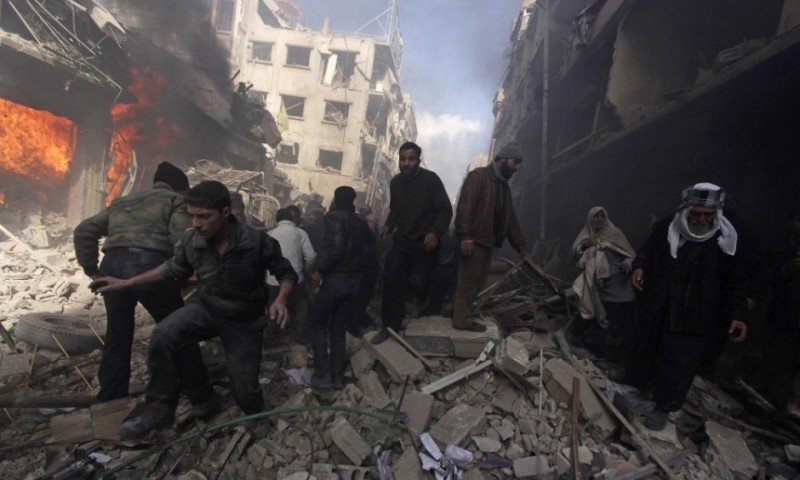 US should use radar to warn civilians of Syrian barrel bombs, group demands

March 1, 2015 8:40 am 0
Watch The Three Musketeers of Terror Lose Their Marbles
If True, Shame on the Iraqi Leadership
A logical imperative

The US military should release radar information taken over Syrian airspace to warn civilians and rescue workers of incoming Assad regime air raids, a campaign group has demanded.

The Syria Campaign, a global advocacy group, launched a petition on Fridaycalling for the White House to facilitate the exchange of airspace data, procured by the US and its allies in the region since the coalition campaign against Isis began striking targets inside Syria last September.

The group claims that by sharing information with civilian first responder groups, including the Syrian Civil Defence who operate mostly in rebel-held areas in the west of the country, an early air strike warning system could be developed allowing civilians “vital minutes” to flee.

A Human Rights Watch report, published earlier in the week, found that government forces have used barrel bombs – crude weapons made of shrapnel and gunpowder designed to elicit fear and inflict damage on civilian populations – at hundreds of locations in rebel-held areas. A United Nations ruling has outlawed their use, as the explosives cannot generally be used to accurately attack military targets. The Syrian president, Bashar al-Assad, used a recent interview with the BBC to deny deploying the weapons.

James Sadri, campaign director of The Syria Campaign said that creating an early warning system using radar data was the next best solution to imposing a no-fly zone in areas of the country, a move the US has been unable to negotiate.

“If the international community is not yet prepared to stop the bombs with a ‘no-fly zone’ the least they can do is provide radar information to help civilians flee those barrels. If the US just picked up the phone to these rescue teams countless innocent lives could be saved,” Sadri said in a statement.

Jeffrey White, a defense fellow at the Washington Institute, a foreign policy thinktank specialising in US involvement in the Middle East, agreed that the US was likely to have a fairly complete picture of northern Syrian airspace at least, due to the presence of a number of US patriot missile batteries in Turkey.

But White said that relying on radar intelligence alone was unlikely to create a robust early warning system as most barrel bomb attacks were carried out by helicopter, which fly low and can be harder to detect. White added that it would also be difficult to ascertain the precise details of a helicopter’s intended flight path.

“Given the number of helicopter missions that are being flown every day in Syria, I’m not sure how much utility it [a radar-based early warning system] would have, other than to give a general warning,” White said.

“It might give them a few additional minutes or some additional time to prepare for action, but it’s not going to tell them which neighborhood in, say, Aleppo is going to be bombed.

“To me it’s a nice idea, but difficult to execute.”

But the Syria Campaign quoted Khaled Khatib an Aleppo member of the Syrian Civil Defence, or White Helmets as they are known, stating any form of early warning information would be useful.

“If we could only get warning that the planes were coming, we could warn families, tell people to run from the markets, get the children out of the schools, let the medical centers know so that they can take cover,” Khatib said. “Every airport in the world has this technology – it is common, it is civilian. Why can’t they share it with us?”

US should use radar to warn civilians of Syrian barrel bombs, group demands