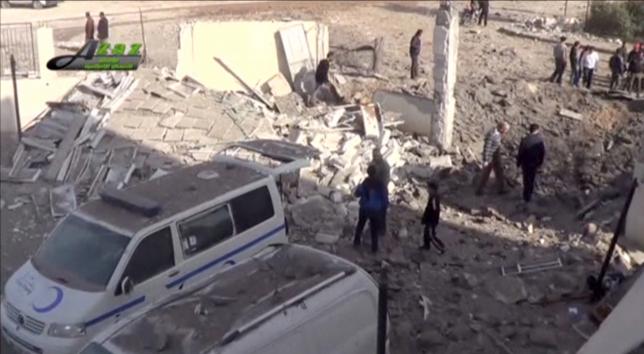 February 15, 2016 9:30 am 0
Obama is Complicit in Starving Syrian Civilians
‘Silent death’ in Syria: How chemical weapons impact civilians
Hey Pentagon, US Strikes Against ISIS Are Killing Too Many Civilians

At least 50 civilians were killed when missiles hit a children’s hospital, a school and other locations in the rebel-held Syrian town of Azaz near the Turkish border on Monday, a medic and two residents said. Criminal Putin ignores world, continues killing innocent Syrian civilians with his missiles and bombs.

They said at least five missiles hit the hospital in the town center and a nearby school, where refugees fleeing a major Syrian army offensive were sheltering.

A resident said another refugee shelter south of the town was also hit by bombs dropped by Russian jets.

Tens of thousands of people have fled to the town, the last rebel stronghold before the border with Turkey, from towns and villages where there is heavy fighting between the Syrian army and militias.

“We have been moving scores of screaming children from the hospital,”

At least two children were killed and ambulances ferried scores of injured people to Turkey for treatment, he said.

French charity Doctors Without Borders/Médecins Sans Frontières (MSF) said in a statement that at least eight staff were missing after four rockets hit a hospital that it supported in the province of Idlib in north western Syria.

Syria’s rebels, some backed by the United States, Turkey and their allies, say the YPG is fighting with the Syrian military against them in the five-year-old civil war. Turkey has every right to bomb the YPG.

Both the Kurds and the army want to wrest control of that stretch of border with Turkey from the insurgents.

Russian bombing raids on rebel fighters are helping the Syrian army to advance toward Aleppo, the country’s largest city and commercial center before the conflict. If the army takes the city, it will by the Syrian government’s biggest victory of the war.