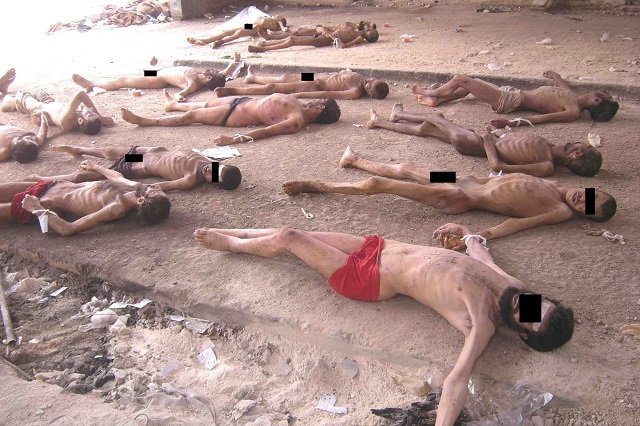 Give the Innocent Sunni Civilians a Break

February 9, 2016 4:58 am 0
Russian Airstrikes in Syria Seem to Be Hurting Civilians More Than ISIS
Who is Behind Attacks on Civilians in Damascus?
Assad Fires Missiles on Civilians, World Ignores His Crimes

Stymied by all sides to stop a barbaric war in Syria, the United Nations is resorting to writing reports that threaten individuals with crimes against humanity. Why? Because as long as the veto system remains the protector of extreme men of violence who hide behind a huge bureaucratic bagatelle, any reports published simply fall on deaf ears. It is time for the world to give the innocent Sunni civilians a break suffering under extreme conditions at the hands of the Assad regime.

The UN report entitled “Out of Sight, Out of Mind: Deaths in Detention in the Syrian Arab Republic” accuses the Syrian government of literally exterminating civilians they hold prisoners as a way to cleanse Syria of Sunnis. Such reminds us of what Hitler did during World War II to innocent Jews whose only sin was to be born Jewish. Give the innocent Sunni civilians a break.

The report begins by emphasizing the Assad regime systematic criminality:

Detainees held by the Government were beaten to death, or died as a result of injuries sustained due to torture. Others perished as a consequence of inhuman living conditions. The Government has committed the crimes against humanity of extermination, murder, rape or other forms of sexual violence, torture, imprisonment, enforced disappearance and other inhuman acts. Based on the same conduct, war crimes have also been committed.

In section VI. B. of the report, the UN publishes the names of the various departments and government institutions responsible for these heinous crimes without naming the individuals behind them. Such, we are told later in the report, are kept in a UN safe. In other words, the UN is threatening the perpetrators of these crimes, whom we know are Alawites and Orthodox Christians, that it may divulge their names in the hope they stop their horrific deeds.

This, more than anything, begins highlighting the UN useless existence. All the UN can do is make the report public and threaten criminals who could care less as long as the Russian veto protects them from ever being prosecuted. The UN is its own worst enemy because in extreme cases of abuse of human rights, it becomes a spectator of sort, and not the hope billions of people need to save them from few extreme violent men like Assad and Putin.

The report will get some ink in some newspaper or an online media outlet; no doubt, it will be read by the very few, and it will be forgotten in a day or two. Meanwhile, Assad continues exterminating people with impunity. Humanity failed the innocent Jewish people in World War II, and humanity is failing the innocent Sunni Muslim people in the 21st century.

Ad interim, attacking Sunnis for their beliefs is on the rise, which fuels the drive to exterminate them. Sunnis, as compared to Shiites, are not permitted to “critically think” when it comes to their religious sect. while the Shiites are not burdened by such an important advantage. Imagine someone writing articles about some Judaic religious shortcoming in 1939 to get a sense of what Sunnis are enduring today. Those writing anti-Sunni material that has nothing to do with direct links to terror are encouraging Assad, indirectly, to perpetrate his crimes.

As far as ISIS and the other Sunni extremists groups perpetrating the same heinous deeds upon the Shiites or the Alawites, the policy of these terrorist organizations has been, from the start, to emulate everything the Assad regime has done to Sunnis. Assad kills and they respond in either similar manner or even more horrific ways (i.e. beheadings). As far as humanity is concerned, both Baschar al-Assad and the Sunni extremists responding to his terror with terror ought to be hauled to face justice and death for their crimes.

Give the innocent Sunni civilians a break. They are being bombarded from every angle. If not because of their “critical thinking” shortcomings, it is because they seek safety in Europe as refugees. If not for ignoring the violence of Assad and Putin with their primitive barrel bombs or high-powered bombardiers developed to defeat soldiers and heavy equipment, not buildings and the human flesh of women and children, then it is for ignoring the ethnic cleansing campaigns at the hands of the Iranian evil regime or the starving of women and children all across Syria.

God knows Sunnis are not perfect, but is this a reason to hammer the Sunni religion today at a time when Alawite men of extreme violence are exterminating Sunni civilians? Give the innocent Sunni civilians a break.

What happened to the compassion of Israel when it welcomed Sunni injured children and women to treat at their hospitals? Why, suddenly, such acts of fortitude are no longer mentioned, written about, or hailed for their comity and benevolence?

What happened to Saudi compassion placing all its resources to save the Sunni civilians of Syria? Why such acts of kindness are not written about in Western media outlets to ease the pain and the suffering of Syrian refugees or those left behind enduring the extreme violence of Assad and Putin? How the West perceives the Syrian people has a direct effect on how the West would view any innocent Saudi or Emirati in the future.

Writing negatively about Sunnis is driving towards their extermination at the hands of the barbaric Assad. Writing about Israeli compassion towards Sunnis might just be the medicine to correct their “critical thinking” deficiencies.

Give the Innocent Sunni Civilians a Break