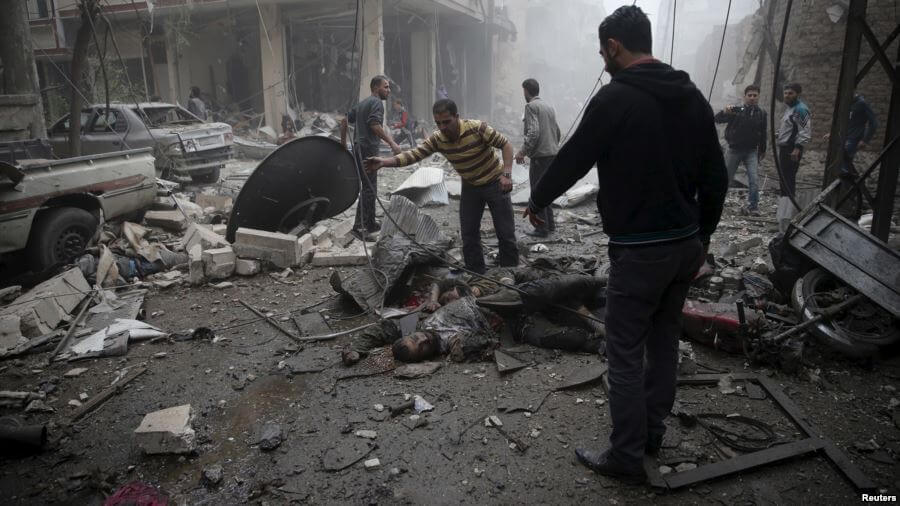 Updated – At least 89 people were killed and about 100 wounded when Syrian government forces fired missiles into a marketplace in a town near Damascus, a conflict monitor and a local rescue group said on Friday.

Assad fires missiles on civilians and the world just ignores his crimes. What have the Syrian people done to this cruel world to deserve ignoring their butcher in Damascus.

Douma has suffered intense bombardment in recent months in a wave of strikes the Syrian army has said targets insurgents that have launched attacks on government-held areas.

Syrian Civil Defense, a local humanitarian rescue group that operates in rebel-held areas, posted a picture on its Facebook page of about a dozen bloodied bodies laid on the ground on plastic sheeting and said more than 45 had died in the attack, which it said used guided missiles.

“Utterly heinous that while world leaders meet for peace in Vienna, attack(s) against civilians continue in Syria,” the group said on Twitter.

It linked to a video (See below) showing people tending to survivors in a chaotic scene of blackened rubble and fire. Footage showed bodies on the ground of the market place, where stalls had been blown to pieces.

Assad fires missiles on civilians and the world just shrugs its shoulders.

Many of Douma’s residents have fled the four-year-old conflict, moving to nearby rural areas. Medics say they have struggled to cope with large numbers of wounded in the intensified strikes.

Syria’s 4-year-old civil war has killed more than 300,000 people and driven more than 10 million from their homes. International diplomats were meeting on Friday at a peace conference in Vienna, the first to be attended by the psychopath mass murderer Baschar al-Assad’s main ally Iran.

Hezbollah is Cornered, Thank the Syrian People
Assad Forces Targeting and Killing Christians
Assad to Syrians is what AQ is to America
Assad Genocide 429