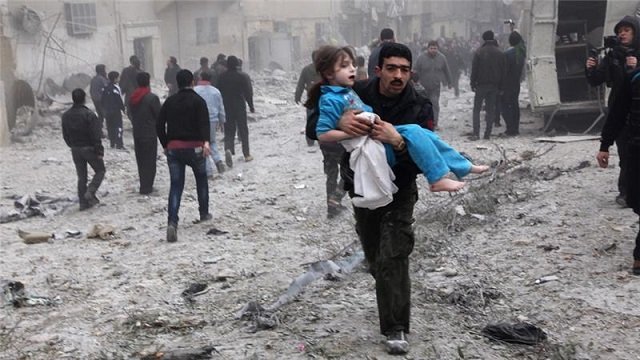 Hey Pentagon, US Strikes Against ISIS Are Killing Too Many Civilians

Strikes by a U.S.-led coalition against the Islamic State group killed at least 38 civilians, including three children, in northeastern Syria on Thursday. One of the strikes hit a bakery. Hey Pentagon, US strikes against ISIS are killing too many civilians

The strikes hit four IS-controlled villages in Hasakeh province. Nine IS fighters had also been killed in the strikes on the four villages.

Activists on the ground said the latest civilian casualties came after two days of civilian deaths in U.S.-led strikes in Hasakeh.

They reported another eight civilians, including one woman, were killed in U.S.-led strikes on another IS-controlled village in the province on Wednesday.

Strikes elsewhere in the province also killed 26 IS fighters on the same day, it said.

And on Tuesday, 15 civilians were killed in U.S.-led strikes on the town of Al-Shadadi, the group said.

That brought the number of civilians reported killed in U.S.-led strikes in Hasakeh to 38 since Tuesday.

The coalition has reportedly stepped up its raids in Hasakeh since the Kurdish-led Syrian Democratic Forces alliance launched a new operation against IS in the southern part of the province on Tuesday.

The alliance has scored successes against IS in other parts of the province in the past, backed by the coalition which began strikes in Syria in September 2014.

It has rarely acknowledged civilian deaths in its campaign against IS.

In January, it admitted three “likely” civilian deaths last year near the IS stronghold of Raqa, bringing to at least 21 the number of civilians the coalition has acknowledged killing in both Syria and neighboring Iraq.

The activists said last month that the coalition campaign had killed some 332 civilians in Syria since it began, among them 90 children.

In total, the campaign has killed more than 4,250 people in Syria, according to the activists, which rely on a network of sources on the ground.

Hey Pentagon, US Strikes Against ISIS Are Killing Too Many Civilians