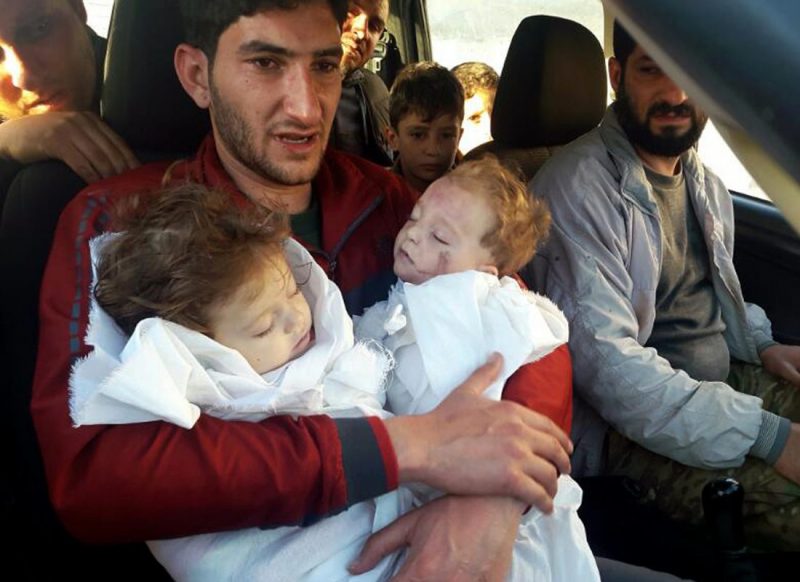 Will Assad Use Sarin Gas After the IRGC Swap?

Under pressure from the United States, and specifically the White House, members of the Free Syrian Army just released 48 Iranian hostages to Assad in return for over 2,100 captive FSA prisoners. Will Assad use Sarin gas after the IRGC swap?

The deal was struck by proxy using Qatar and Turkey to facilitate the swap. The hostages harbored a trove of intelligence treasure because of their knowledge about IRGC procedures and targets. We would imagine Iran would only dispatch the “Créme de la Créme” of its IRGC men to save Assad.

Why such pressure from the White House? Because if you read Michael Ledeen’s Blog titled “The New Iranian Hostage Crisis” you would realize the conditions Iran imposed on Obama to continue negotiating; this comes on the heels of four years of negotiations leading the US down the same path others have taken. On top of over 30 years before the last four thus turning Foggy Bottom’s NEA into one happy ferret on a Ferris Wheel.

As soon as those 48 IRGC terrorists were released, The Pentagon leaked the reasons why Obama drew his infamous Red Line threat. Why the detailed leak now? Is it possible that some unhappy officials in The Pentagon are sending veiled warning to the Free Syrian Army. Will Assad use Sarin gas against whole cities after this swap?

We cannot help but question the timing. Even though the article refers to Russia securing Assad’s chemical weapons in return for a U.S. promise. One made by Secretary Clinton not to militarily interfere in Syria. Putin can, at any time, take advantage of Obama’s weakness by interpreting arms flowing to the rebels as foreign military intervention.

But should Assad believe that Obama’s Red Line is just grandstanding; and that Obama’s commitment to negotiating with Iran is as absolutist. If so, then nothing will stop Assad from using Sarin Gas against our people. Assad needs to end the fighting as quickly as he can because he is running out of cash.

Syrian Blood on al-Thani of Qatar

If this happens, then the Syrian blood is on the hands of Erdogan and al-Thani of Qatar. Both of whom are happy to play the role of errand boys for Obama without any consideration for Syria’s long-term survival. Indeed, both had the opportunity to pressure Obama to deliver weapons to the FSA in return for the 48 IRGC fighters swap and both ignored the reasonable thing to do.

We hope we’re wrong about this assessment. Because the end goal here is to stop Assad, including the minimization of any danger to use WMD against the Syrian people. Grant you, the FSA swap was conducted with people thinking with their hearts rather than their brains. But now that the FSA made that mistake, we should focus on what Assad might do with his Sarin gas. Also, on what Obama’s reactions might be.

Unfortunately for us, we trust Obama’s Red Line as much as we trust Assad’s commitment to political reform or a peaceful resolution to Syria’s tragedy.

Will Assad Use Sarin Gas After the IRGC Swap?