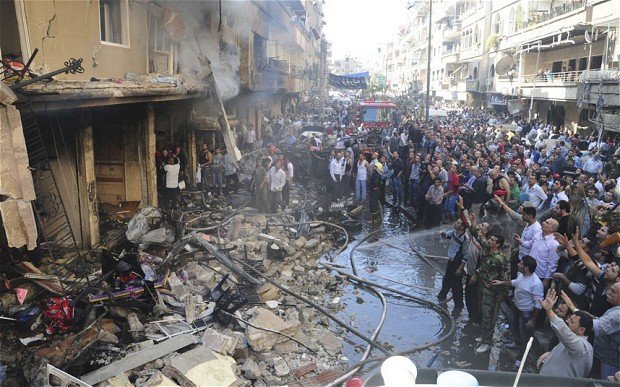 You Want alQaeda? You Got alQaeda

Assad believed he can create pseudo-al-Qaeda organizations, like Fatah al-Islam, to suit his purpose and thanks to his masters in Tehran who managed to align their interests with the real al-Qaeda, he never really considered fighting it one day.

However, during the last year or so, Assad wanted some elements of al-Qaeda to cause havoc in Syria to use as a propaganda ploy to get the western world to his side. After all, he has worked with these people before in Syria and he believed he can control them.

For almost a year, there have been hundreds of car bombs and suicide attacks in Syria. Some are grand and some cause little damage. Some are caught and some slip right through so easily. These car bombs are inspired by extremist elements flooding Syria to fight Assad and his thugs.

How they are being used is also worthy of our attention.

Last week, Assad bombed a bakery in Aleppo causing death to some 30 Syrians, including women and children, and over 100 injuries. Today, a car bomb exploded next to a bakery in Jarmanna south of Damascus, a Christian-Druze neighborhood, causing the death of 10 Syrians and over 40 injuries.

After today’s bomb in Jarmanna, Assad warplanes had sixty bombing sorties against FSA-held neighborhoods in the suburbs of Damascus. This was by far the most concentrated air power ever in one day leveled against the FSA and the civilians living in those suburbs.

If Assad wanted al-Qaeda, well, he got al-Qaeda. What he did not expect is the ferocity he himself is known for. Ironic, isn’t it?

Anatole France once said “Irony is the gaiety of reflection and the joy of wisdom”. I recommend Assad reads one of his chef d’oeuvres titled Opinions Sociales written in 1902.

You Want alQaeda? You Got alQaeda

Obama Stands Blameless for a New Class of Extremists in Syria
Russia Ignores ISIS in Aleppo, Concentrates on Moderate Rebels
Too Much Arab Talk When Action to Save Aleppo is Needed
Opinions 1017 Radicalism 567 Syrian Revolution 1335