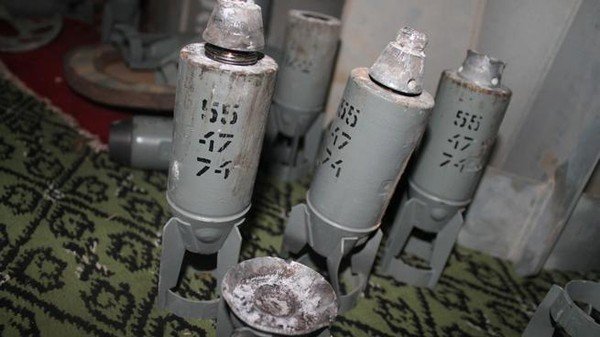 September 2, 2014 9:09 am 0
Surprising Way Some Syrians Are Protecting Themselves From Snipers
The Carnage of Barrel Bombs in Syria
Syria crisis: starving children forced to survive on fruit, leaves and nuts

Al-Arabiya – The Islamic State of Iraq and Syria (ISIS) militants have used cluster munitions in Syria in at least one location in northern Syria in recent weeks, Human Rights Watch said on Monday, citing “credible evidence.”

“The use of cluster munitions by non-state actors such as the Islamic State shows the urgent need for Syria and all nations that have not yet done so to join the ban on cluster munitions and destroy their stockpiles,” HRW said.

The group cited an attack on Aug. 21 as the most recent report of the use of cluster ammunition by the regime.

“Syrian government forces have used at least 249 cluster munitions since mid-2012 in multiple locations in 10 of Syria’s 14 governorates, based on video and film evidence, witness accounts, and research by Human Rights Watch and others. The actual number is probably much higher as not all instances of use have been recorded,” the New York-based group said.

Steve Goose, arms division director at Human Rights Watch and chair of the Cluster Munition Coalition (CMC), said: “Any use of cluster munitions deserves condemnation, but the best response is for all nations to join the treaty banning them and work collectively to rid the world of these weapons.”

A recent survey by the Cluster Munition Coalition found that there are at least 1,584 casualties from cluster munition attacks and unexploded submunitions in Syria in 2012 and 2013, while hundreds more were recorded in the first half of 2014. The vast majority of those identified as killed – 97 percent – were civilians.

It said world governments meeting in San Jose, Costa Rica between Sept. 2 and Sept. 5, 2014 will discuss the use of cluster ammunition in Syria in 2014 as well as in in Ukraine, and South Sudan.