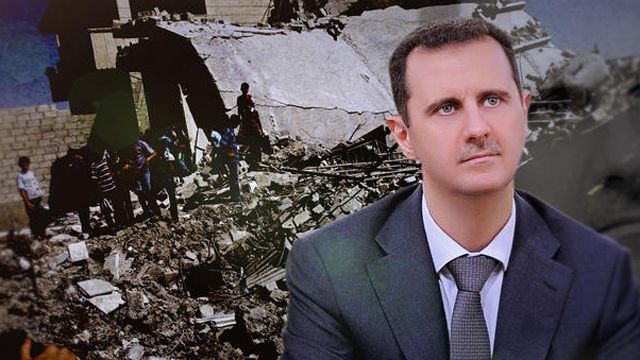 Why Would Russia Agree to Investigate Assad’s Use of Chemical Weapons?

August 28, 2015 8:15 am 0
Washington, we have a problem in Syria
The Nine Dangers Facing Syria
Behind The Lines: Assad’s North Korean Connection

The remarks were included in a letter to the U.N. Security Council outlining his plans for an investigation into alleged gas attacks, to be conducted by the United Nations and Organization for the Prohibition of Chemical Weapons (OPCW).

“Success will … depend on the full cooperation from all parties, including the Government of the Syrian Arab Republic and other parties in Syria,” Ban said in the letter, seen by Reuters.

The aim is “to identify to the greatest extent feasible individuals, entities, groups, or governments who were perpetrators, organizers, sponsors or otherwise involved in the use of chemicals as weapons, including chlorine or any other toxic chemical.”

Is the international community looking for a fall guy in the Assad camp and outright condemnation of other rebel groups for gas attacks that Assad ordered? If so, the U.N. would lose all credibility and become a convenient political tool for mass murderers.

The body of nations would never be able to recover from such a false investigation aimed at protecting those who committed crimes against humanity.

There is a lot of western committed intelligence already publicized pointing the fingers at Assad. Why would Russia and the U.N. risk becoming a mockery on the world stage?

Ban said the inquiry will be chaired by an assistant secretary-general and two deputies. Earlier on Thursday he said in a statement that “continuing reports of the use of chemical weapons, as well as the use of toxic chemicals as a weapon in the Syrian conflict are deeply disturbing.”

He did not say who will chair the inquiry.

Ban’s letter is in response to the Aug. 7 adoption of a council resolution calling for an investigation.

The council is expected to respond to Ban within five days.

The investigation will have a one-year, renewable mandate.

Western powers say the Assad government has been responsible for chemical attacks, including chlorine attacks. The Syrian government and Russia have accused rebel forces of using poison gas, which sets the stage for implicating the wrong parties.

Ban was asked to set up the investigation after the United States struck a deal with Russia, a strong backer of Assad, to demand an investigation. Maybe this was John Kerry’s way to save his friend Assad.

Syria agreed to destroy its chemical weapons in 2013 in a bid to avoid U.S. military strikes threatened over a sarin gas attack that killed hundreds of civilians. The OPCW has since found chlorine has been “systematically and repeatedly” used as a weapon, though it is not mandated to lay blame.

A separate U.N. investigation had previously determined that sarin gas was used repeatedly in Syria to deadly effect, but that inquiry was also barred from assigning blame.

Chlorine’s use as a weapon is prohibited under the 1997 Chemical Weapons Convention, which Syria joined in 2013. If inhaled, chlorine gas turns to hydrochloric acid in the lungs, which can be deadly.

Why Would Russia Agree to Investigate Assad’s Use of Chemical Weapons?