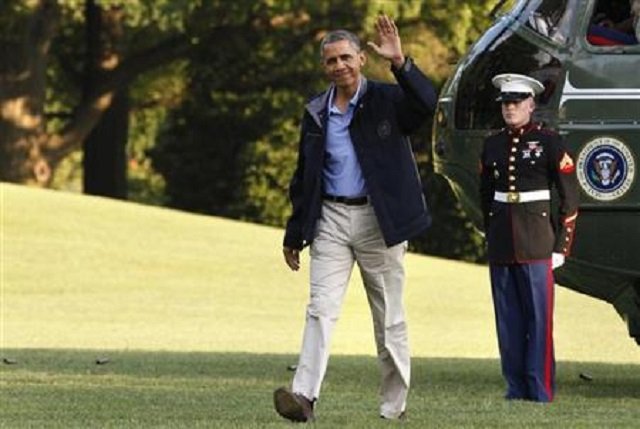 Obama and Syria: a trail of half-steps, mixed messages

July 27, 2013 5:48 am 0
The Region Can No Longer Afford Assad
Intellectual Alawites Issued a Statement Condemning Assad
Another Assad Massacre at a Prison in Hama

Their unusual mandate: think outside the box on how to push Syria’s psychopath Baschar al-Assad from power.

Led by a senior member of Obama’s National Security Council, the handful of Pentagon, State Department and intelligence specialists came to a consensus: Obama should weigh military options to reinforce his vow that Assad must go.

But with Obama determined to avoid U.S. military intervention, the idea found little traction inside the White House. And by mid-2012, the so-called “small group” – whose very existence was known to only a few within the government – was disbanded, former U.S. officials said.

The group’s aborted mission underscores the half-steps and mixed messages that have characterized Obama’s Syria policy. After nearly two years of hesitancy in Washington, Assad now has regained the upper hand in the conflict, and the White House last month finally approved providing limited arms for Syrian rebels, a step Obama had long resisted.

Implementing even that decision has proven difficult, as U.S. lawmakers criticize the aid as too little, too late and question Obama’s Syria strategy. A House of Representatives committee approved the arms shipments only this week following a month’s delay during which members demanded more administration clarity.

Reuters interviews with more than a dozen current and former U.S. officials and foreign diplomats provide new details about Obama’s decision-making, guided by his conviction that Assad could be toppled without direct foreign intervention and his reluctance to drag the United States into another Middle East war.

In months of internal debate, he often spurned advice from senior advisers who proposed more robust action as the carnage in Syria intensified, leaving some frustrated.

Administration officials reject criticism that if Obama had acted more forcefully earlier the rebels would have fared better against well-armed government troops.

“There was no way support from outside sources to the opposition would have narrowed the gap when the regime had tanks and warplanes,” said one senior official, speaking on condition of anonymity.

Some former officials and many Syria specialists disagree and say the fighting – which has killed an estimated 100,000 people, created 1.8 million refugees and deepened sectarian rifts in Syria and beyond – now threatens wider U.S. interests in the Middle East.

RIGHT SIDE OF HISTORY?

Obama’s tone emerged early in the conflict. On August 18, 2011, in what was supposed to be a watershed moment, he called for Assad to give up power, a move coordinated with leaders of Britain, France, Germany and Turkey.

“For the sake of the Syrian people, the time has come for President Assad to step aside,” Obama said.

The declaration, which the White House had resisted making for months, came in response to intense pressure from U.S. allies and the public to break with Assad, as the Syrian leader sent troops and tanks into urban centers to crush swelling civilian protests.

But Obama’s statement was preceded by spirited internal debate at the White House.

Some younger advisers, including Samantha Power, now Obama’s choice for U.N. ambassador, and communications strategist Ben Rhodes, argued that with Assad’s rule looking shakier by the day, the president should get on the “right side of history” and call for him to go, former aides said.

But Middle East policy veterans were more cautious. They argued that uttering what one called the “magic words” about Assad would raise expectations of an active U.S. role.

Steven Simon, the White House’s top Middle East adviser, questioned whether Obama should make the statement if Washington was unprepared to follow up with action, according to a source familiar with the discussions.

Simon argued that Assad, backed by the Russians and Iranians, might have greater staying power than it appeared, this source said.

But at the time, Obama was prepared to do little more than combine diplomacy aimed at easing Assad out with economic sanctions – he banned purchases of Syrian oil and U.S. citizens from dealing with the Damascus government.

Some ex-aides now see a critical miscalculation about the strength of the Assad government.

“There was a kind of consensus that, early on … he couldn’t survive all that long,” said Dennis Ross, a top White House adviser on the Middle East until late 2011, who argued for both tougher rhetoric and more action. “And there was a kind of presumption that if we just do the economic stuff, we’ll make it untenable and that will be sufficient.”

Another former senior official lamented the gap between Obama’s call for Assad’s ouster and plans to enforce the declaration: “When the president says something like this, it’s not an advisory opinion. Something’s got to be done to make it happen… There was no strategy in place. That was it.”

‘TELL ME WHERE THEY LEAD’

As Syria’s civil war spread in early 2012, with lightly-armed rebel factions outgunned by Assad’s army, senior lawmakers such as Republican Senator John McCain began calling on Obama to back the rebels.

In an unusual move, Petraeus and Clinton a year ago jointly proposed to the White House that Washington arm rebel groups that had been carefully vetted, minimizing the chances that weapons would fall into the hands of radical Islamist factions. The proposal was backed by Panetta and Joint Chiefs Chairman General Martin Dempsey. U.S. intelligence czar James Clapper was aware of it and not opposed, a U.S. official said.

But Obama vetoed the recommendation.

His reluctance underscored what Ross described as the president’s skeptical and exacting approach to military intervention, colored by U.S. difficulties in Iraq and Afghanistan.

The inability of rebel forces to organize and overcome their political divisions posed another major hurdle.

Obama “would say, ‘If you are going to propose specific steps, tell me where they lead,'” said Ross, now at the Washington Institute for Near East Policy. “I don’t think you can look at it independently from Iraq and Afghanistan. And particularly the sense that these are easy to get into and hard to get out of.”

By the time Clinton and Petraeus made their proposal in the summer of 2012, the White House was already quietly examining what the former senior official called “harder options.”

A U.N.-brokered Syria truce was falling apart; Russia and China had vetoed U.N. Security Council sanctions on Assad; and the rebels and their Arab allies were calling for arms.

Created and led by National Security Council adviser Simon, the “small group” had six to eight members, including Frederic Hof, then the State Department’s top Syria adviser, and senior Pentagon and intelligence community officials. The group’s existence has not been reported before, and the White House did not respond to emailed questions about it.

The Pentagon representatives cautioned over the cost, risk and outcome of U.S. military involvement.

Nonetheless, a rough consensus formed, officials said, that Obama should at least review military contingencies such as no-fly zones and targeted air strikes.

But after Obama rejected the Clinton-Petraeus proposal, the study group was also shut down, around July 2012.

By mid-2012, the White House seemed increasingly convinced that Assad was on his way out. It told U.S. government agencies to focus on planning for a post-Assad Syria, the former senior official said.

But U.S. intelligence reports showing Syrian forces moving chemical weapons stocks were also alarming U.S. officials. Obama on August 20 declared the movement or use of chemical weapons a “red line” that, if crossed, would bring unspecified consequences. The threat had little visible impact.

This spring, two factors came together to finally spur Obama to arm the rebels, current and former officials said.

As deputy national security adviser Tony Blinken put it in one Situation Room meeting with Obama and other aides: “Superpowers don’t bluff.”

Idriss, who had won Secretary of State Kerry’s backing, confirmed that Syrian government and Hezbollah fighters had taken the key rebel stronghold of Qusair, and were threatening other areas.

Kerry, who had already canceled an overseas trip to deal with the Syria crisis and his Middle East peace initiative, argued during White House meetings that the rebels needed much stronger U.S. support.

In a meeting of the “principals,” Obama’s top national security team, on June 12, Kerry said that the United States should go beyond arming opposition fighters and use air strikes, a person familiar with the talks said. Joint Chiefs Chairman Dempsey pushed back strongly, arguing that such a mission would be complex and costly.

The next day, the White House announced the president had decided on direct military aid to Idriss’ Supreme Military Council. By one account, Obama had made the basic decision to shift policy, on his own, in the opening days of June.

The announcement came not from Obama himself, but from his aide Rhodes. That was seen by some as proof of Obama’s continued wariness.

When Kerry and CIA Deputy Director Michael Morell briefed intelligence committee members in late June, both men left the impression that the administration itself still had reservations about arming the rebels, sources familiar with their presentations said.

The limited and relatively light arms – automatic weapons, mortars and rocket-propelled grenades – are unlikely to be delivered until August, officials have said. Many observers inside and outside the administration are doubtful it will be enough to tilt the balance in the rebels’ favor.

Obama and Syria: a trail of half-steps, mixed messages