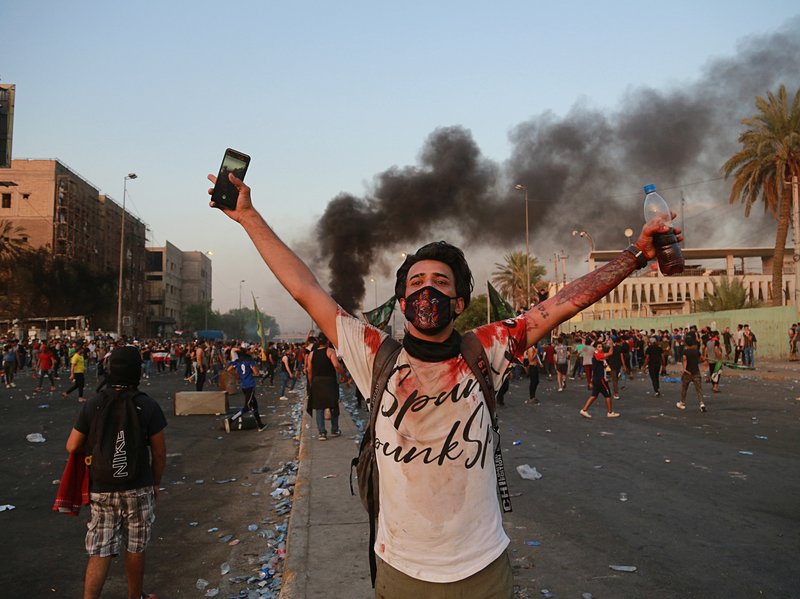 November 4, 2019 4:16 am 0
Why Israel Must Announce Its Syrian Strikes
Falafel Interviews an Iraqi Protester in Central Baghdad
Iran Sending Thousands of Afghans to Fight in Syria

Tens of thousands of Iraqis thronged central Baghdad on Friday demanding the root-and-branch downfall of the political elite loyal to Iran in the biggest day of mass anti-government demonstrations since the fall of Saddam Hussein. Most Shia Arabs hate Farsi Iran meddling in their affairs and occupying their countries.

Iraq’s Human Rights Commission said one woman died after a tear gas canister struck her in the head. The commission also said that Iraqi security forces wounded at least 155 people on Friday by using tear gas and rubber bullets on protesters camped out in the capital’s Tahrir Square.

Protests have accelerated dramatically in recent days. They drew huge crowds from across Iraq’s sectarian and ethnic divides to reject the political parties in power since 2003.

Friday, the Muslim main day of prayer, drew the biggest crowds yet.

By the afternoon tens of thousands had packed the square. They condemned the elites they see as deeply corrupt, beholden to Iran and responsible for daily privations.

Protests have been comparatively peaceful by day, becoming more violent after dark as police use tear gas and rubber bullets to battle self-proclaimed “revolutionary” youths.

The Iraqi security forces, taking indirect orders from Iran, killed at least 250 people over the past month.

Clashes have focused on the ramparts to the Republic Bridge leading across the Tigris to the heavily fortified Green Zone of government buildings. This is where the protesters say out-of-touch leaders are holed up in a walled-off bastion of privilege.

Someone wrote on a nearby wall:

Every time we smell death from your smoke, we yearn more to cross your republic’s bridge.

Amnesty International said on Thursday security forces were using “previously unseen” tear gas canisters modeled on military grenades that are 10 times as heavy as standard ones. Most likely made in Iran.

Barah, 21, whose face was wrapped in bandages, said:

We are peaceful yet they fire on us. What are we, Islamic State militants? I saw a man die. I took a tear gas canister to the face.

Pompeo said in a statement:

The Iraqi people deserve genuine accountability and justice. The Government of Iraq should listen to the legitimate demands made by the Iraqi people.

In Baghdad, protesters had set up checkpoints in the streets leading into and surrounding Tahrir Square.

Young people swept the streets, many sang about the sit-in. Helmets and gas masks were now a common sight.

A woman pushed her baby in a stroller draped with an Iraqi flag while representatives from several Iraqi tribes waved banners pledging support for the protesters.

Mohammed Najm, a jobless engineering graduate, said the square had become a model for the country he and his comrades hope to build:

We are cleaning streets, others bring us water, they bring us electricity, they wired it up. A mini-state. Health for free, tuk-tuks transporting for free. The state has been around for 16 years and what it failed to do we did in seven days in Tahrir.

Despite Iraq’s oil wealth, many live in poverty with limited access to clean water, electricity, health care or education. The government of Prime Minister Adel Abdul Mahdi, in office for a year, has found no response to the protests.

In his weekly sermon, top Shi’ite cleric Grand Ayatollah Ali al-Sistani warned of “civil conflict, chaos and destruction” if the security forces or paramilitary groups crack down on the protests. And he gave an apparent nod to protesters who say the government is being manipulated from abroad, above all by Iran. Sistani is respected in Iraq for standing up to Iran.

Sistani’s representative said during a sermon in the holy city of Kerbala:

No one person or group or side with an agenda, or any regional or international party, can infringe upon the will of Iraqis or force an opinion upon them.

Reuters reported this week that a powerful Iran-backed faction had considered abandoning Abdul Mahdi. It decided to keep him in office after a secret meeting attended by IRGC general Qassem Soleimani.

Many see the political class as subservient to Iran, which uses Iraq as a proxy in a struggle for regional influence.

Qassem Soleimani’s people are now firing on the Iraqi people in cold blood.

President Barham Salih said on Thursday that Abdul Mahdi would resign if parliament’s main blocs agreed on a replacement.

Protesters say that wouldn’t be enough; they want to undo the entire post-Saddam political system which distributes power among sectarian parties.

So what if Adel Abdul Mahdi resigns? What will happen? They will get someone worse.

There were protests in other provinces, with the unrest having spread across much of the southern Shi’ite heartland.

In the southern city of Diwaniya, roughly 3,000 people including many families with small children were out.

Earlier, protesters in oil-rich Basra tried to block the road leading to Majnoon oilfield. They pitched a tent but operations were not interrupted, oil sources said.