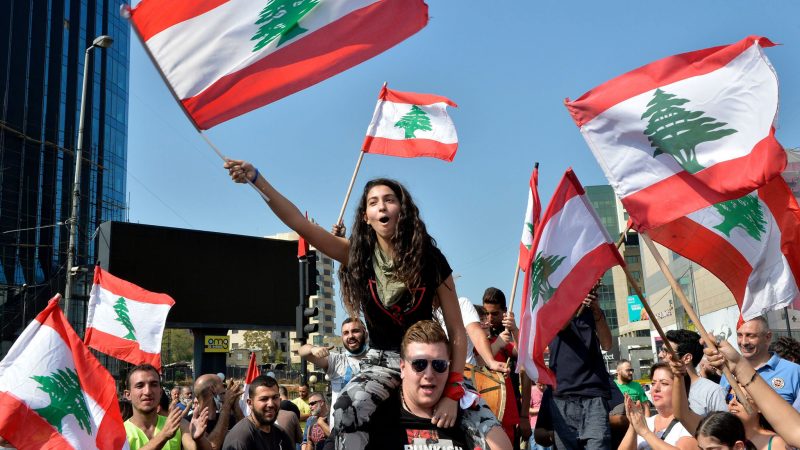 November 2, 2019 2:46 am 0
Conditional Aid to Lebanon Must Seek Ouster of Michel Aoun
Michel Aoun Asked for the World to Help Unconditionally
Trump Should Protect the US Embassy in Lebanon

As governments in Iraq and Lebanon stagger and stumble under huge waves of popular protest, powerful factions loyal to Iran are pushing to quash political upheaval which challenges Tehran’s entrenched influence in both countries. In effect, Arab nationalism is revolting against foreign religious loyalties.

Both governments have enjoyed backing from the West. But they have also relied on the support of political parties affiliated with powerful Iran-backed Shi’ite armed groups, keeping allies of Tehran in key posts.

That reflects the relentless rise of Iranian influence among Shi’ite communities across the Middle East; mostly since Tehran formed the militant group Hezbollah in Lebanon in 1982 and after Saddam Hussein was toppled in Iraq in 2003.

Both Iraq and Lebanon have government systems designed to end sectarian conflict by guaranteeing a share of power to parties that represent different communities. In both countries, leading Shi’ite groups are closely associated with Iran, and not their own country. These militant groups have held on to weapons outside the official security forces. They have created an Iranian state within an Arab country. Arab nationalism is revolting against Iranian occupation and the systematic pilfering of their resources.

Protesters are now challenging those power structures. Both Lebanese and Iraqis blame for corruption, the dire state of public services and the squandering of national wealth.

WHO IS BEHIND THE PROTESTS?

Unusually in both countries where sectarian parties have previously dominated politics, most protesters are not linked to organized movements. In both countries they have called for the kind of sweeping change seen in the 2011 Arab uprisings. This is an anti Iran Arab spring of 2019.

In Lebanon, demonstrations flared in late September against bad economic conditions as the country grappled with a deepening financial crisis. Nationwide protests broke out two weeks later against government plans to raise a new tax on calls using popular mobile phone software such as WhatsApp.

In Iraq, demonstrations began in Baghdad and quickly spread to the southern Shi’ite heartland. The Iraqis dislike deeply Iranian foreign influence in their own country.

WHAT IS AT STAKE AS ARAB NATIONALISM IS REVOLTING?

In Iraq, the protests have taken place on a scale unseen since Saddam’s overthrow, with sweeping demands for change. The authorities have responded with a violent crackdown which left more than 250 people dead. Many were killed by snipers on rooftops firing into crowds. A reminder of Iranian terror in Syria backed by its murderous dictator.

Arab nationalism is revolting against Iranian religious entrenchment and corruption.

The fact that you were seeing that level of mobilization makes the protests more dangerous in the perception of the political elite.

The mainly Iran-backed militias view the popular protests as an existential threat to their loyalties to Iran based on sectarianism, not nationalism.

In Lebanon, the demonstrations come at a time of economic crisis widely seen as the worst since the 1975-1990 civil war. If Hariri’s resignation prolongs the political paralysis it will jeopardize prospects of rescue funding. Mostly emanating from Western and Gulf Arab governments.

HOW HAVE IRAN’S ALLIES RESPONDED?

Whenever Hezbollah feels threatened, it points to foreign powers as a shield to discount its foreign loyalty to Iran.

Hariri announced his resignation shortly afterwards despite pressure from Hezbollah not to concede to the protests.

In the absence of an obvious replacement for Hariri, Hezbollah, which is under U.S. sanctions, faces a predicament. Although Hezbollah and its allies have a majority in parliament, they cannot form a government on their own because they would face international isolation, said Nabil Boumonsef, a commentator with Lebanon’s an-Nahar newspaper.

It would be the quickest recipe for financial collapse. The whole world will be closed to them.

In Baghdad, Abdul Mahdi’s government is secure for now after apparent Iranian intervention. Reuters reported this week that Qassem Soleimani, the head of the elite Quds force of Iran’s Revolutionary Guards, which sponsors Tehran’s allies abroad, flew to Baghdad for a secret meeting at which a powerful Shi’ite party agreed to keep the prime minister in office.

Iraqi security officials have said that Iran-backed militias snipers shot down from rooftops at crowds last month. Just as in Syria, Assad killed his own people, so is the Iraqi government pursuing the same tactic.

WHAT ARE THE LIMITS OF IRANIAN INFLUENCE?

In Lebanon, a longstanding accord on power-sharing means no single confession can dominate state institutions. For all its prominence, Hezbollah picked only three ministers in Hariri’s last cabinet.

A winner-takes-all mentality just does not work in Lebanon.

Houry believes Hezbollah may have miscalculated by employing “scare tactics” against the protesters.

This goes against the grain of Lebanese politics. They are going to have to compromise.

In Iraq too “Iran has more influence than any other country … but it doesn’t have control over what happens there,” says Crisis Group’s Iran project director Ali Vaez.

WHAT IS THE INTERNATIONAL RESPONSE?

In Iraq it is too early to say. Tehran’s main rival, the United States, has so far kept mostly quiet on the protests, probably waiting to see the outcome.

In Lebanon, which urgently needs outside funding to keep its economy afloat, Tehran’s international foes have used their financial clout to challenge its influence more directly. Before he quit, Hariri failed to convince foreign donors to release $11 billion in aid pledged last year. Mainly because of Hezbollah’s prominence.

Wealthy Sunni Gulf Arab states, engaged in a proxy conflict with Iran across the region, had long funded Beirut. However, Saudi Arabia cut back support sharply three years ago. The kingdom said Hezbollah had “hijacked” the Lebanese state.

Gulf Arab countries and the United States have coordinated moves against Iranian-linked targets with sanctions on 25 corporations, banks and individuals linked to Iran’s support for militant networks including Hezbollah.