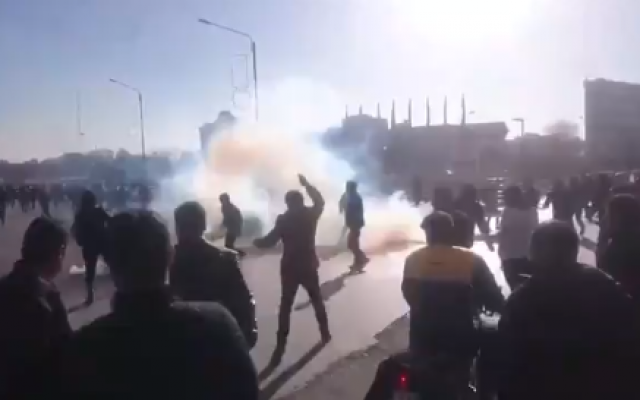 Iranian Civil War, is it Inevitable?

December 29, 2017 6:39 pm 0
Will Trump let Assad get away with using chemical weapons in Syria?
The Iran Deal is the Root Cause of Most Terror Acts
After Iran Deal, Dismantling Hezbollah Piece-by-Piece

The Iranian people have had enough. For economic reasons, yesterday they started protesting in several cities simultaneously only to turn their chants against the Mullahs for their oppressive policies and interference in Syria. It is too early to tell, but will these protest lead to an Iranian civil war that is inevitable the way Syria’s early protests led to a 7-year civil war that has no end in sight?

The people of Iran have had enough way back in 2009, but the US president, back then, was none other than Barack Obama, probably the wimpiest US President ever, who turned his back on the good people of Iran in favor of corrupt and violent clerics. If it was not for Barack Obama, Iran may be a free nation today, and four Arab countries would not have to suffer the indignities imposed upon them by thugs and murderers.

If the history we saw unfold in Syria, when Baschar al-Assad unleashed hell on his own people to stop their revolution, is an indices, the Mullahs in Iran would most likely duplicate by unleashing their own brand of hell upon the protesters the way they did in 2009. However, unlike 2009 when Barack saw the rise of the Iranian people as a nuisance, President Trump would welcome with open arms a revolution in Iran that could eradicate many of the problems the region is experiencing today.

An Iranian civil war means the Mullahs would have to recoil leaving behind Syria, Yemen, Lebanon, and Iraq to defend themselves at home. General Qassem Suleimani, head of the Quds Force, would need to turn his attention inward to save his neck and those of his protectors.

The protesters, according to BBC, ‘… believe that money that should be used to improve their lives is being spent by Iran’s leaders on conflicts in Syria, Yemen and Iraq. Billions are also being spent on spreading religious propaganda and Shia Islam around the world.”

Which is why many chanted slogans contrary to anything a Mullah would approve of. One chant went “leave Syria, think about us”.

The videos seen below attest to these protests. Just as the Syrian civil war started.

Iranian Civil War, is it Inevitable?