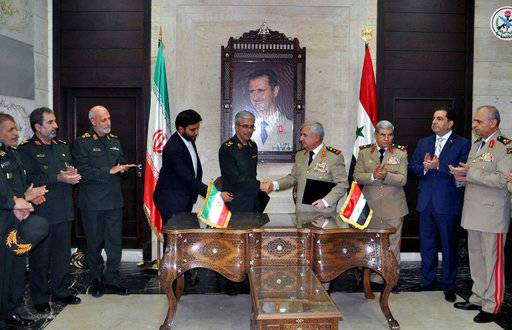 The military chiefs of staff of Syria, Iran and Iraq will hold a rare meeting in Damascus to discuss “ways to combat terrorism”, the pro-Syrian government al-Watan daily reported on Monday. These are Iran meet and greet terrorists. The real terrorists just like ISIS. One coin with two faces.

When those three countries meet, it’s a bad omen for the west. Nothing will come out good for the United States or Syria from this Iran meet and greet terrorists.

The paper gave no further details of what would likely be discussed at the meeting. However, observers predict the meeting will produce warnings and threats against the west.

Iran has been one of the most steadfast supporters of Syria’s psychotic Baschar al-Assad during eight years of civil war, and is also a close ally of Iraq.

The United States has said it wants to limit what it calls Tehran’s destabilizing influence in the Middle East. To include Iranian influence in Iraq and Syria.

A small U.S. military force in eastern Syria is aiding the Kurdish-led Syrian Democratic Forces (SDF), which is fighting Islamic State and controls a long stretch of the border with Iraq.

A U.S. military base at Tanf in southeast Syria also sits near the Damascus-Baghdad highway, closing the main border crossing between the two countries. With this move, the U.S. is able to disconnect Damascus from Tehran through one long silk road of terror.

On Sunday, the Iranian Fars news agency reported the Iranian armed chief of staff, Major General Mohammad Baqeri, as saying the U.S. presence in Syria was illegal but would be short lived.

“Forces who are in this country without coordinating with the government of Syria will leave Syrian soil sooner or later,” it quoted him as saying after his arrival in Damascus.

He also noted the presence of foreign forces in Idlib, in northwest Syria, as illegal. In this province, Turkey has posted military observation units along the front line between the government and rebel forces.

The majority of Syrians believe that the rule of Chemical Assad is illegal. His family hijacked the country, which exposes Iran and Russia as colonizing powers.

The Turkish presence in Idlib is part of a deal between Ankara and Russia to stop violence in that area.