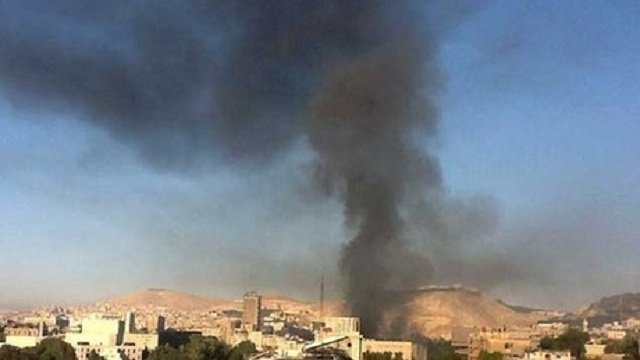 No Security For Assad When Rockets Land in Damascus

January 6, 2016 11:26 am 0
Orchestral Syrian War Producing an Immoral Symphony
The Mother of All Stalemates in Syrian Civil War
Submitting the Syrian People to Assad the Butcher

Government and rebel bombardment killed at least 20 civilians and wounded dozens in the Syrian capital and a nearby opposition bastion on Wednesday, state media and a monitoring group said. There is no security for Assad as long as he is unable to stop rebel rockets from landing in Damascus.

The attack came after the regime fired rockets onto the Eastern Ghouta town of Douma earlier in the day, killing five civilians.

Eastern Ghouta, which is largely controlled by the Jaish al-Islam (Army of Islam) rebel group, is regularly bombarded by government forces.

Seven other civilians, including a child, were later killed in government air strikes on the nearby towns of Hazzeh and Zamalka.

Activists on the ground also gave the same toll as state media for the attack on Damascus and said some of the wounded there were in critical condition.

More than 300,000 people have been killed since Syria’s conflict erupted in 2011 with protests against the psychopath Baschar al-Assad’s regime of terror.

No Security For Assad When Rockets Land in Damascus