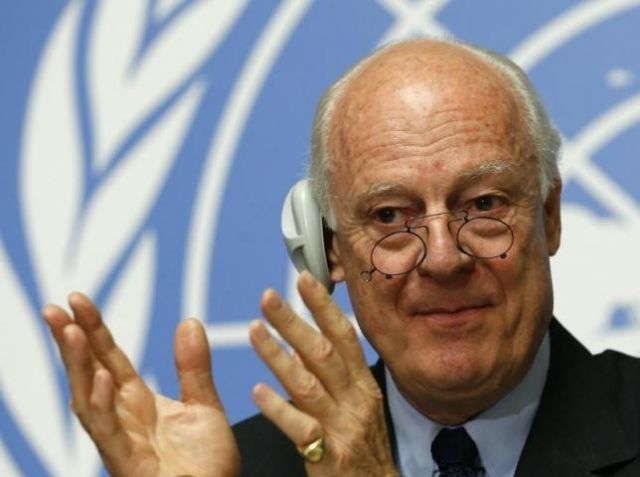 June 14, 2015 7:24 am 0
Will Alawite Mothers Save Syria?
In-fighting Among Assad Loyalists on the Rise
Syrian Youth: The Fight Within

U.N. Syria envoy Staffan de Mistura plans to meet senior Syrian government officials in Damascus in his effort to find common ground among the parties with an interest in ending Syria’s civil war, his office said on Sunday. in diplomacy, we call this effort ‘reasoning with barbarism’.

De Mistura began the talks last month saying he expected to meet 40 or more delegations for one-on-one discussions in Geneva, including Syrian officials, opposition and civil society, and representatives of governments in the region and with influence in the conflict.

“During his visit, Mr. de Mistura intends to raise with the Syrian government the issue of protection of civilians, underlining once again the unacceptable use of barrel bombs and the incontestable duty of any government, in all circumstances, to protect its civilians,”

Raising the issue of barrel bombs with Syrian government officials is like doctors talking to cancer cells as a form of treatment.

De Mustura’s office did not say if he would meet with Assad, nor did it specify exact travel dates, which are always kept confidential for security reasons.

The main Syrian political opposition group refused to come to meet him, inviting him instead to meet them in Istanbul.

Sunday’s statement also said De Mistura’s series of meetings would continue into July, confirming that the provisional timetable — with a plan to report back to U.N. Secretary General Ban Ki-moon at the end of June — had been extended.

The U.N. statement said De Mistura would also discuss the humanitarian situation in Syria and ways to increase access to besieged and conflict-affected communities. Again, this is reasoning with barbarism like humans reason with gorillas.

To look good for the camers and the microphones, De Mustura’s office also said:

“In his discussions, the Special Envoy plans to convey once again to Syrian officials his deep conviction that no solution to the Syrian conflict can be imposed by force and that an inclusive and Syrian-led and owned political settlement is urgently needed.”

The four-year war has killed more than 300,000 people, injured more than 1 million, driven almost 4 million out of the country as refugees and left 12.2 million others in need of humanitarian aid, including 5.6 million children.

With all that carnage, the U.N. believes reasoning with barbarism is the solution.