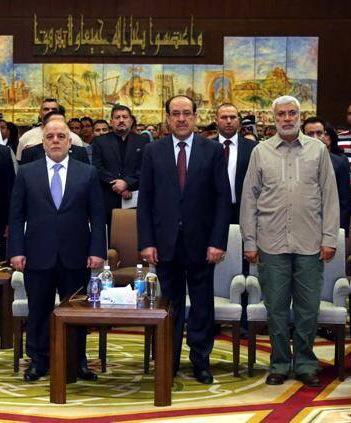 So much for Iraqi moderates.

According to an article by the Long War Journal, Prime Minister Haidar al-Abadi is seen in a photograph standing next to “Abu Mahdi al Muhandis, a former commander in the Badr Organization who was listed by the US government as a specially designated global terrorist in July 2009 and was described as “an advisor to” Qods Force commander Qassem Soleimani.

The photograph clearly shows how blurry the lines are in Iraq, and that by helping Iraq, we are indeed helping Iran. But then, isn’t what this U.S. President only goal is? To help Iran achieve supremacy in the region?

The photograph was taken at a ceremony that celebrated the one year anniversary of the fatwa, or religious edict, that called for Shiites to wage war against the Islamic State. The fatwa, which was issued by Grand Ayatollah Sistani, led to the formation of the Popular Mobilization Committee in the summer of 2014, which Iran quickly turned into Shiite Jihad in Syria.

This photograph is the perfect gift Khamenei can send Obama to remind him who really rules Iraq. We ask the same question again: Why are we helping Iraq when Iran rules the country?

So much for Iraqi moderates the Obama administration keeps hailing to make itself look good.

Meanwhile, in another story, 80 U.S. servicemen arrived in Anbar Province to assist the Iraqi Government in its battles against the Islamic State. Such a deployment is viewed by the Sunnis as U.S. siding with the Shiite terror of Iran against the Sunnis. This is why defeating IS is going to be close to impossible.

Even if the Sunnis of Anbar Province create new allegiances to help the U.S., they will quickly ignore them because they do not trust Barack Obama and his detente with Iran.

But do not tell this to Susan Rice or Ben Rhodes about helping Iraq. They are still trying to figure out what the difference is between Sunnis and Shiites.

Te U.S. policy with regard to Iraq is misguided at best. The U.S. State Department is slowly accepting the notion that Iran is going to rule if they want to keep control of their “diplomacy first” culture.