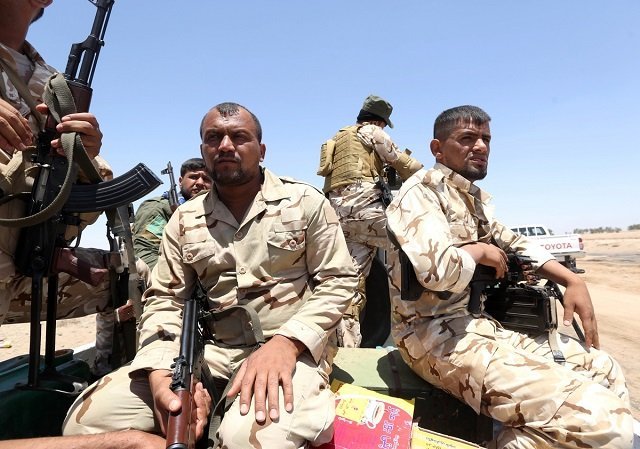 Iraqi paramilitaries exchanged fire with police in Baghdad Thursday, the latest sign of tension between the Iraqi Arabs governing and the country’s Shiite militias backed by foreign Iran.

“The guards went to the police, which dispatched units of around 60 men equipped with armored personnel carriers to expel the gunmen, who opened fire,” the officer said.

A police colonel said three policemen were wounded in the clashes, which resulted in the militiamen eventually leaving the building.

“The gunfire lasted for almost an hour,” said Wafa Mohammed, who lives nearby. “We were scared inside our home and had no idea what was happening on the street.”

A shop owner from the same neighborhood said some members of the security services negotiated with the gunmen when the exchange of fire stopped.

The Hashed al-Shaabi is made up of volunteers and several mostly Shiite militias Iran backs. They are theoretically under the prime minister’s command but largely escape his control. Although they are Iraqi Arabs, they are loyal to foreign Iran only.

These rogue and dangerous militia elements would most likely be the recipient of Iranian funds the U.S. President is about to release if a U.S.-Iran deal is signed. Many countries are warning the Obama Administration against such a foolish move.

The interior ministry issued a statement that appeared to allude to the overnight clash in Zayyounah.

“In the wake of the latest incidents, the minister and ministry officials discussed the situation in Baghdad and the means to provide security and stability,” it said.

In other words, the ministry is saying “We Iraqi Arabs cannot stand the Iran-backed violent Shiite militias, but what choice do we have?”

The statement said the minister had asked Prime Minister Haider al-Abadi, his party and other political groups, “to support the ministry in its efforts to confront undisciplined groups.” Iraqi Arabs are fed-up with the lawlessness of foreign backed-militias.

Interior Minister Mohammed al-Ghaban himself is a member of the Badr organization, the political wing of one of Iraq’s most prominent Shiite militias. Go figure Iraq America supports unconditionally.

While paramilitary groups enjoy huge popular prestige, critics say those groups need to do more to rein in members — or gunmen who claim to be members — challenging the law with impunity, especially in urban areas.