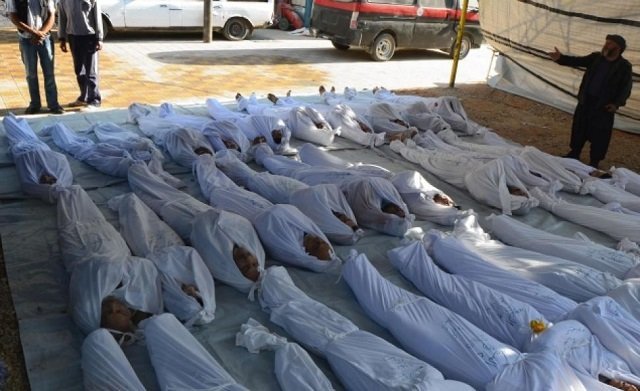 September 9, 2013 5:50 am 0
Of Dead Reporters, Assad, and Pulitzer
The Reform Delusion
Last Straw to Save Assad is Gaza

Syria’s top leaders amassed one of the world’s largest stockpiles of chemical weapons with help from the Soviet Union and Iran, as well as Western European suppliers and even a handful of American companies, according to American diplomatic cables and declassified intelligence records.

While an expanding group of nations banded together in the 1980s to try to block the Syrian effort, prohibiting the sale of goods that would bolster the growing chemical weapons stockpile, the archives show that Syria’s governing Assad family exploited large loopholes, lax enforcement and a far greater international emphasis on limiting the spread of nuclear arms.

Now, as President Obama confronts enormous difficulties in rallying a reluctant Congress and a skeptical world to punish the Syrian government with a military strike over what is said to be its apparent use of deadly nerve agents last month, he appears to be facing a similar challenge to the one that allowed the Assads to accumulate their huge stockpile. While countries around the world condemned Syria for adding to its arsenal as most nations were eliminating their own, few challenged the buildup, and some were eager to profit from it.

“People tried. There were always other understandably urgent priorities — Iran’s nuclear program, North Korea,” said Mr. Zarate, who has written a book about American efforts to crack down on illegal financing for terrorist groups and states including Syria, Iran and North Korea. “It was an issue that was always there, but never rose to the top of the world’s agenda.”

Proliferation experts said Bashar al-Assad of Syria and his father before him, Hafez al-Assad, were greatly helped in their chemical weapons ambitions by a basic underlying fact: often innocuous, legally exportable materials are also the precursors to manufacturing deadly chemical weapons.

Soon after Mr. Obama came to office, newly installed officials grew increasingly alarmed by the ease with which Mr. Assad was using a network of front companies to import the precursors needed to make VX and sarin, deadly chemical poisons that are internationally banned, according to leaked diplomatic cables from WikiLeaks, the antisecrecy group.

Sarin gas has been identified by the United States as the agent loaded atop small rockets on Aug. 21 and shot into the densely populated suburbs of Damascus, killing more than 1,400 people, according to administration officials.

The growth of Syria’s ability was the subject of a sharply worded secret cable transmitted by the State Department under Secretary of State Hillary Rodham Clinton’s name in the fall of 2009. It instructed diplomats to “emphasize that failure to halt the flow” of chemicals and equipment into Syria, Iran and North Korea could render irrelevant a group of antiproliferation countries that organized to stop that flow.

The cable was included in a trove of State Department messages leaked to WikiLeaks in 2010.

Another leaked State Department cable on the Syrians asserted that “part of their modus operandi is to hide procurement under the guise of legitimate pharmaceutical or other transactions.”

Publicly, American officials contend that they have done much since then to limit the flow of raw materials that feed Syria’s chemical weapons industry, in particular Syria’s Scientific Studies and Research Center, which has been identified as a principal government enterprise for weapons development. Israel struck a missile convoy outside the center in January, American intelligence officials have said, on suspicions that weapons were headed for delivery to Hezbollah in Lebanon.

“For several years, the Treasury Department, working with our partners across the U.S. government, has taken steps to expose and disrupt the Syrian regime’s W.M.D. proliferation activities,” David S. Cohen, the Treasury under secretary in charge of sanctions, said in an e-mailed statement. “We will continue to use all of our authorities to undermine the Syrian government’s W.M.D. proliferation efforts within Syria as well as around the world.”

The diplomatic cables and other intelligence documents show that, over time, the two generations of Assads built up a huge stockpile by creating companies with the appearance of legitimacy, importing chemicals that had many legitimate uses and capitalizing on the chaos that followed the collapse of the Soviet Union. A Russian general responsible for dismantling old Soviet chemical weapons, who died a decade ago, was identified by a colleague as the man who helped the Syrian government establish its chemical weapons program.

As early as 1991, under the first Bush presidency, a now declassified National Intelligence Estimate concluded that “both Czechoslovakia and the Soviet Union provided the chemical agents, delivery systems and training that flowed to Syria.” The same report concluded that Syria most likely possessed 500-kilogram aerial bombs containing sarin — larger, it appears, than the warheads mounted atop rockets that killed so many in the Ghouta suburbs of Damascus on Aug. 21.

While investigations by the United Nations into the attack remain incomplete, a group of outside academic experts reported last week that some of the warheads used contained 100 kilograms or more of sarin agent.

But even with such a large stockpile of weapons on hand, the director of national intelligence, James R. Clapper Jr., reported to Congress earlier this year that Syria “remains dependent on foreign sources for key elements” of its program. That dependence points to an important vulnerability that the West may be able to exploit as it tries to stop Syria from expanding its program.

The most detailed and highly classified cables in the WikiLeaks trove underscore that, while Syria has the ability to make chemical weapons, it relies heavily on other nations for getting precursor ingredients that can also be used for medicine.

Crucial chemicals and the missiles to deliver them have come not just from nations long allied with the Assad government, like Iran and Russia, but also from China (sometimes operating through North Korea) and a variety of Western nations, the cables and other documents show. In a few instances, American companies became players in Syria’s efforts to add to the sophistication of its stores.

One of the best-known cases in the United States involved a Waterville, Me., company once known as Maine Biological Laboratories. The company and several top executives were found guilty of allowing a series of shipments to Syria in 2001, including restricted biological agents.

That was one of several instances that involved deals with American firms, the cables show. In another case, an unidentified American company sold potassium cyanide to a Syrian pediatric hospital in 2006, but made no effort to check whether it was used for treating patients, as the Syrians had insisted was done, or instead was diverted for making chemical weapons.

A March 2006 State Department cable from the American Embassy in Damascus described how Syrians seemed to be exploiting trade with the West. “Syrian businessmen regularly report on the ease with which their fellow businessmen illegally import U.S. commodities with seeming impunity, as well as express concerns that the USG’s lack of enforcement of the economic sanctions” are “hurting those that choose to play by the rules.”

Those transactions presumably included chemicals that could be precursors for chemical warfare.

The Americans were not the only ones concerned.

According to another leaked cable, the Netherlands discussed how monoethylene glycol, an important raw material used to manufacture urethane and antifreeze, was shipped by a Dutch concern to the Syrian Ministry of Industry, considered a front for the Syrian military. The Dutch outlined how the chemical could also be used as a precursor for sulfur mustard, and possibly for VX and sarin.

These and other instances caused diplomats to seek more international control of goods that could aid Syria’s chemical weapons program. In 2009, the State Department pressured its delegation to the Australia Group, the 40-nation organization aimed at stopping the spread of chemical weapons, to push harder to constrain such trade.

“Emphasize that failure to halt the flow of AG-controlled goods into Syria, Iran and North Korea,” said a leaked State Department cable sent out over Mrs. Clinton’s name, could “call into question the AG’s relevance and important role in nonproliferation.”

Proliferation-monitoring officials attribute some of this failure to a simple lack of government resources to police the enormous volume of international chemical transactions, the globalization of that industry, and a greater concern about monitoring nuclear weapons.

“Precursor chemicals have not gotten the same attention as the nuclear trade,” said one Congressional expert, who asked not to be identified because he was not authorized to talk about investigative findings. “It’s been a known problem for a long time, and yet it happens.”