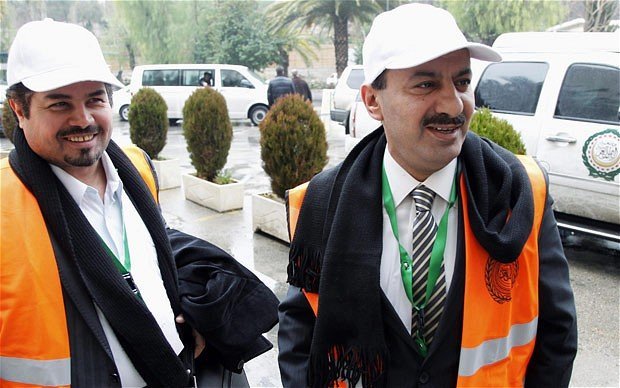 An interview conducted on al-Arabya of one of the first injured observers sent by the Arab League to monitor the situation in Syria laments the fate of the Syrian people.

Asked to describe what he is witnessing, advisor al-Mahjoub said: “This is a government taking revenge on its people”. He describes in details (And so does the bloody video footage) the massacres taking place in Homs and specifically in Bab Amrou, a Sunni populated region.

In the beginning of the interview, al-Mahjoub asks a question that is on everyone’s mind in Syria and in the Arab world “Where are the Arab rulers, where is the conscious of the world to see what is happening in Syria?”

Asked to describe his mission, al-Mahjoub says in a very calm demeanor and voice but still stirring with muffled emotions “As soon as we pass a region, the Syrian security start bombing it behind us”. He repeated it twice.

Yesterday, the White House regurgitated the same rhetoric it has been saying since August 18. It said that President Bashar Assad cannot be trusted, does not deserve to rule and must leave power. The diplo-words used to show outrage but intended also not to lift a finger to get rid of a terrorist and a mass murderer.

Towards the end of the 3-minute interview, al-Mahjoub says “What is happening in Syria proves that the Jews are respectable” comparing how Assad is killing his people when Israel respects the Palestinians.

Loading...
Newer Post
Please Awaken Your Conscious to the Tragedy of the Syrian People
Older Post
While Syrians are Massacred, the Arab League Waves a Finger