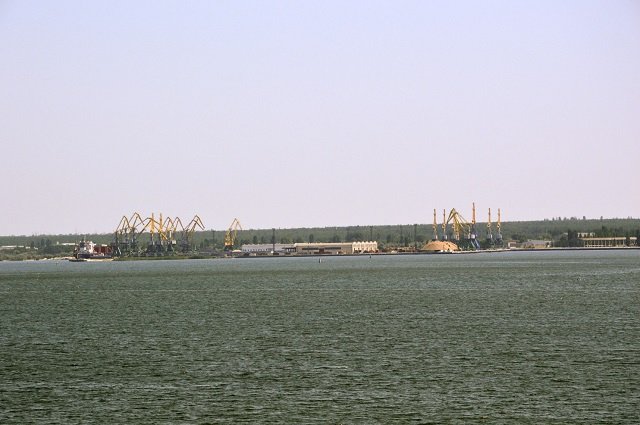 On Jan. 5, the Ocean Fortune, a 380-foot-long workhorse of the global arms trade, left this Black Sea port with unknown cargo concealed in its cavernous hold. The ship steamed south, slipped through the Bosporus Strait and turned toward the eastern Mediterranean. Then it disappeared.

Not a trace of the ship was seen for two months, until it surfaced in the southeastern Mediterranean in mid-March.
The ship’s apparent vanishing act repeated a pattern seen by other freighters embarking from the same Black Sea port — a known point of origin for weapons shipments — over the past year. Recently, such behavior has begun drawing the attention of investigators tracking the flow of arms and supplies to the combatants in Syria’s 21 / 2-year-old uprising.

Western governments have long known that Russia is providing crucial backing for the government of Bashar al-Assad, including many of the heavy weapons used to battle opposition forces. But Western intelligence officials and independent experts say a substantial portion of the aid appears to be arriving in commercial ships, prompting analysts to look closely at this Cold War-era military port and its long history of arming Russian allies and some of the world’s most repressive regimes.

A new study by independent conflict researchers describes a heavy volume of traffic in the past two years from Ukraine’s Oktyabrsk port, just up the Black Sea coast from Odessa,to Syria’s main ports on the Mediterranean. The dozens of ships making the journey ranged from smaller Syrian- and Lebanese-flagged vessels to tanker-size behemoths with a long history of hauling weapons cargos.

The report by C4ADS, a Washington-based nonprofit group, linked some of the larger vessels to a network of businessmen and companies with ties to senior government officials in Russia and Ukraine.

The authors acknowledged that there are no manifests or satellite photos proving that the ships carried weapons, and they say shipping data are sometimes imperfect.

“This discrepancy, combined with a history of moving weapons on behalf of the Russian government, is what makes the voyage suspicious,” said Farley Mesko, the center’s chief operating officer and a specialist in illicit maritime networks.

Russian President Vladi­mir Putin has publicly defended his country’s right to sell arms to Syria, and senior officials have vowed to fill standing contracts to supply aid to Damascus. The United States and several Persian Gulf countries have supplied military gear to rebel militias seeking to overthrow Assad.
Kaalbye Group, the Ukraine-based company that owns the Ocean Fortune,acknowledged in an e-mail that one of its ships, the Ocean Voyage, traveled to Syria last year to discharge a “dual-purpose cargo” that was legally permitted under the rules of the International Maritime Organization but asserted that there had been no further travel to Syrian ports by any of its vessels. The IMO’s “dangerous goods” guidelines restrict the transportation of explosives and flammable material but do not explicitly ban weapons.

Such explanations fail to quiet the suspicions of U.S. officials who say the handful of documented weapons deliveries do not account for the flood of Russian and Eastern European gear that has entered Syria in recent months. Rep. Mike Rogers (R-Mich.), chairman of the House intelligence committee, has publicly accused Russia of “pouring weapons into Syria like there’s no tomorrow.”

“Russia has been a sophisticated purveyor of weapons around the world for decades, and the Assad regime is clearly getting resupplied,” Rogers, a vocal critic of Russia’s backing for the Syrian regime, said in an interview. “If a ship that’s a known supplier of weapons leaves a port and turns off its transponder — in the FBI, we’d call that a clue.”

The tide of arms moving into Syria has also been confirmed by other Western and Middle Eastern governments and directly linked to a shift in momentum in Assad’s favor earlier this year. After months of losing ground to rebels, the Syrian regime recaptured several key towns in early spring with help from Hezbollah fighters from Lebanon and what intelligence officials describe as an influx of high-quality arms and equipment.
The materiel that arrived in the winter and spring included refurbished helicopters and battle tanks, replacing those destroyed or disabled during two years of fighting, according to U.S. and Middle Eastern officials with detailed knowledge of the resupply effort.

“The new Russian equipment has been a huge factor, and very much behind the shift in Assad’s favor,” said a senior official for a Middle Eastern country that borders Syria. The official agreed to discuss sensitive intelligence on the condition that his name and nationality not be revealed. “It’s not just the amount, it’s the quality. It’s all the things they really need.”

U.S. and Middle Eastern officials think that the most sophisticated equipment, including aircraft and tanks, arrived in Russian military ships, including Ropucha-class landing craft, known as LSTs, that have been observed entering the Russian naval facility at Tartus, Syria, a key refueling station and Russia’s only naval base outside the former Soviet Union. On at least two occasions, commercial ships are known to have been dispatched to Syria with military-related cargo, including helicopters.

It is much harder to link specific weapons shipments to any of the scores of private vessels that stream in and out of Syrian ports with cargos concealed below decks or inside identical, truck-size shipping containers. But commercial shipping would be the preferred method for delivering more mundane supplies such as machine guns, small arms and ammunition, the officials said.

“The volume of materiel that Syria is receiving,” the Middle Eastern official said, “would suggest that we’re not just talking about a few Russian LSTs.”

The Black Sea port that is the focus of questions about Syrian arms shipping is unknown to most Westerners, for good reason: For most of its existence, Oktyabrsk was a top-secret naval installation, a key part of the military supply chain for the Soviet Union and its allies around the world. It was from this heavily guarded port, for example, that Moscow sent nuclear-capable missiles to Havana in 1962, triggering the confrontation that would become known as the Cuban missile crisis.

In some ways, the harbor on the Black Sea’s Bug River estuary appear frozen in a kind of Cold War time warp. The port is off-limits to visitors, surrounded by high fences and barbed wire and patrolled by armed guards who peer at passersby from watchtowers and barricaded gates. Only the far banks across the river afford a view of the loading docks, dedicated rail lines and rows of military-style storage bunkers, many of them surrounded by earthen berms as a precaution against accidental explosions.
Upriver, the nearby city of Mikolaev retains a distinctly Soviet flavor. Statues of Soviet military heroes and Vladi­mir Lenin, the first Soviet leader, dominate the city’s central thoroughfare, and the local administrative buildings are still adorned with a Soviet star. The broad avenues and shaded outdoor cafes suggest a relatively high living standard, reflecting what local residents say are the comparably good wages paid by the port and nearby shipyard.

But it’s the type of ships frequenting the port that has drawn the interest of outside investigators. The analysis by C4ADS places Oktyabrsk at the center of a robust, international weapons trade that links Russia and Ukraine to a wide variety of arms customers around the world.

The report identifies Oktyabrsk as the point of origin for weapons shipments headed to more than a dozen countries, many with histories of brutal repression of opposition groups or ethnic or religious minorities. The list of customers include Sudan, the Democratic Republic of the Congo, Burma, Venezuela, China, Angola and Iran.

Despite being in Ukraine, Oktyabrsk “is functionally controlled by Russia,” and the port is headed by a former Russian navy captain and owned by a business magnate with close ties to the Kremlin, the report said. Major Russian weapons exporters have offices there, alongside Ukrainian and Russian shipping and logistics companies the report has dubbed the “Odessa Network.”

“This network is a microcosm of how Putin’s Russia works: powerful government officials with informal ties to ostensibly private individuals, who basically carry out state policy,” said Tom Wallace, a co-author of the report.

A key player in the network, according to the report, is the Kaalbye Group, a business consortium that owns the Ocean Fortune, the Ocean Voyager and five other vessels, some of them linked to the movement of advanced Russian military equipment to clients around the word. Three of Kaalbye’s freighters traveled to Oktyabrsk last year to pick up the heavy rocket launchers and top-of-the line S-300 anti-aircraft missiles that were part of a $4 billion weapons-buying binge by Venezuela’s Hugo Chávez in 2011.

The firm’s senior managers have business and professional ties to officials at the highest levels of the Russian and Ukrainian governments and arms industries, connections confirmed in company Web sites and trade publications. One co-founder, Igor Urbansky, was a deputy minister of transportation in Ukraine. Another co-founder, Boris Kogan, is also a board member of RT Logistika, a subsidiary of a large, state-owned Russian industrial consortium that includes Russia’s most prominent military export firm, Rosoboronexport. The consortium is headed by Sergei Chemezov, a close Putin ally. All of RT-Logistika’s other board members are senior defense officials, including the director of logistics for Rosoboronexport.

“We judge,” the report states, “there is a direct correlation between the ties of senior Kaalbye personnel to organs of state power, and the lucrative weapons transportation contracts they receive.”

Syria has long claimed a portion of Oktyabrsk’s ship traffic, but its share appears to have risen in recent months as the country’s civil war intensified.

A database of transponder records compiled by C4ADS found that Oktyabrsk was the most popular destination for Syrian-owned vessels traveling to ports anywhere in Ukraine or Russia. Several Syrian cargo ships made a dozen or more round trips between Oktyabrsk and one of Syria’s three main ports between January 2012 and the middle of 2013, the analysts found. Whether the boats were carrying military supplies or more innocuous cargo was impossible to tell from shipping records.

Additionally, at least 10 other ships owned or operated by members of the Odessa Network have made port calls in Syria since last year, including those owned by Vadim Alperin, whose ship Faina was hijacked in 2008 off Somalia while carrying a cargo of T-72 tanks and other military hardware.
More striking was the actions of Ukrainian-owned vessels such as Kaalbye Group’s the Ocean Fortune. Kaalbye’s entire fleet of seven freighters picked up cargo in Oktyabrsk over the past 18 months, the report said, and then, in the case of the Ocean Fortune, went “off the grid” — disappearing from at least three global databases that record transponder data for international shipping.

“The evidence presents a strong circumstantial case that these ships and companies were moving weapons or other sensitive cargo to the Assad regime,” it said. Bolstering the case, it said, is the fact that “publicly reported Russian arms shipments were also carried out by members of this network.”

Sunnis and Shia Can Build Syria Together
You Think Obama Did Not Know This Was Going to Happen?
Falling on Deaf Ears
Syrian Revolution 1352