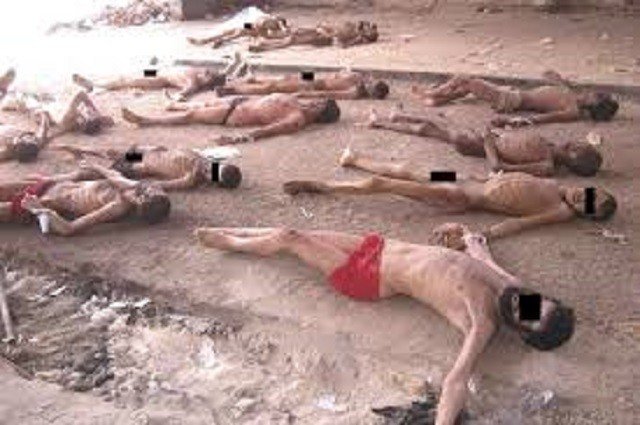 October 16, 2014 8:42 pm 0
What Assad Is Forcing Orthodox Christians To Do
Hollande: Russia’s Intervention Will Not Save Assad
White House children running amok

A small exhibit, entitled “Genocide: The Threat Continues,” features a dozen images from an archive of 55,000 pictures smuggled out of Syria. The photographer, codenamed “Caesar,” testified in July before the US Congress that he witnessed a “genocidal massacre” and photographed more than 10,000 bodies as part of his job.

Some images at the museum show dozens of bodies lined up or piled atop one another with their faces obscured. Others show the effects of depravation and torture, including electrocution, gouged out eyes and removed genitals, said Cameron Hudson, the director of the museum’s Center for the Prevention of Genocide. They’re powerful images, and viewers are immediately reminded of the Holocaust, he said.

“They show a side of the Syrian regime that hasn’t really been really seen. You might have heard about it, read about it, but when you’re confronted with these images, they’re impossible to ignore,” Hudson said.

The museum relied on forensic examinations of the photographs conducted by the FBI and by former prosecutors and forensic experts of the International Criminal Court to verify the authenticity of the images. The US State Department has cited the FBI’s examination as well, though the results have not been publicly released.

Syrian opposition groups hope to use the images to prosecute Assad’s regime for war crimes.

The photos were first released in January on the eve of a peace conference for Syria in Geneva as part of a forensic investigation funded by the government of Qatar — a major backer of the opposition and one of the nations most deeply involved in the Syrian conflict, prompting some outside skepticism. The veracity of the photos could not be independently confirmed.

The photos were shown to the UN Security Council in April. At the time, US Ambassador Samantha Power said the images “indicate that the Assad regime has carried out systematic, widespread and industrial killing.”

At the Holocaust Museum, the images of Syrian corpses from detention centers share striking similarities with those of concentration camps during the Holocaust, Hudson said, showing evidence of starvation and emaciated bodies. They are the result of long-term detention, not battlefield deaths, he said.

“You don’t wither away and die like that on a battlefield” Hudson said. “You don’t get that in a matter of days or weeks. It’s months and months of depravation that causes the human body to wither away like that.”

Daniel Sturm, 23, of Portland, Oregon, visited the museum for the first time Wednesday with his mother. He follows news out of Syria but said he and most people don’t know what’s happening on the ground. So he was impressed to see the images, he said.

“When you look at that, that is absolutely systematic killing,” Sturm said. “No emotion to it. Just ‘let’s get rid of that situation.’”

It’s important to remember genocide didn’t end with the Holocaust and is a real threat in Syria, Hudson said.

The museum decided to exhibit the images for the foreseeable future because its scholars have long studied how witnesses who escaped Nazi Germany and reported atrocities to President Franklin D. Roosevelt and other officials in Washington, only to be ignored.

“We realized that this person, Caesar, the Syrian who escaped, he was a witness,” Hudson said. “We felt an obligation to tell his story as someone who showed real courage in coming forward and escaping and trying to tell the story of what he saw.”