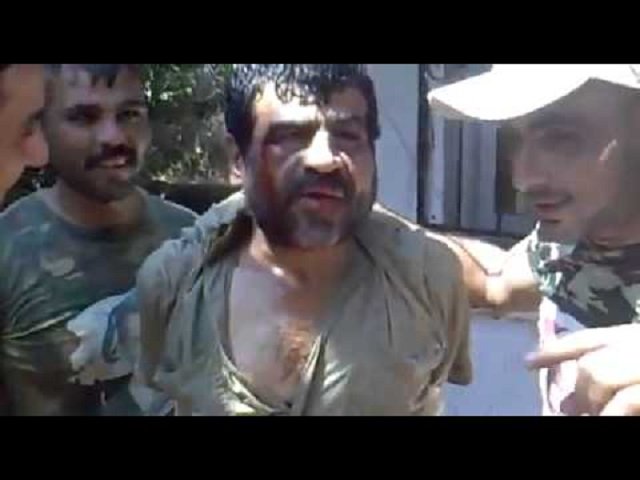 Imagine if your own government kidnaps you to seek ransom funds for its war against you. You think calling Assad a psychopath is unjustified?

Syria’s government is profiting from money charged to families of people trying to find loved ones forceably disappeared in what are crimes against humanity, rights group Amnesty International charged Thursday.

The group said the Syrian state was benefiting from an “insidious black market in which family members desperate to find out the fates of their disappeared relatives are ruthlessly exploited for cash.” Put differently, Assad profiteering from widescale disappearances of his own Sunni population.

Amnesty said nearly 60,000 civilians are believed to have been “disappeared” since Syria’s conflict began with anti-government protests in March 2011.

Families are left with no trace of their relatives and often face detention themselves if they contact security services seeking information.

That has given rise to a black market in which middlemen are paid sums up to tens of thousands of dollars to collect information about missing loved ones. Assad profiteering from these widescale disapperances most of them conducted by the Shabeeha Alawite gangs in Syria.

“As well as shattering lives, disappearances are driving a black market economy of bribery which trades in the suffering of families who have lost a loved one.  They are left with mounting debts and a gaping hole where a loved one used to be.”

Nicolette Boehland, the report’s author, said there was ample evidence that the state was benefiting from the money being paid to brokers.

“We are certain that government and prison officials are profiting from the payments they receive in relation to disappearances, as this has been corroborated by hundreds of witnesses. The practice is so widespread that it is difficult to believe the government is not aware of it and effectively condoning it by failing to take action to stop it.”

It cited the case of one man whose three bothers disappeared in 2012 and who spent $150,000 (138,000 euros) trying to find them. He was unsuccessful and ended up in Turkey, working to pay back his debts, the group said.

Luther said the government’s campaign of enforced disappearances amounted to crimes against humanity and urged the UN Security Council to refer the situation in Syria to the International Criminal Court.

“States supporting the government of Syria, including Iran and Russia… cannot wash their hands of the mass crimes against humanity and war crimes being committed with their backing,”

He said Russia was in a “unique position to convince the government to end this cruel and cowardly campaign of disappearances.”

More than 300,000 people have been killed in Syria since the conflict began in March 2011 with protests against the psychopath Baschar al-Assad’s rule.

All parties to the increasingly complex war have been accused of rights violations of varying degrees of severity, ranging from arbitrary detention to the use of chemical weapons.

Look at the video below of Shabeeha humiliating a Syrian after beating him senseless. This is the Assad regime in all its glory.