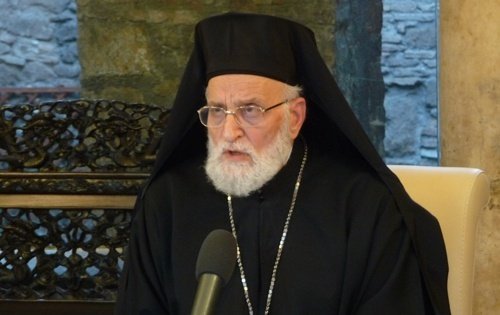 Where Was Patriarch Gregorios Laham When Assad Gassed Civilians?

June 13, 2015 7:23 pm 0
Hormuz Iranian Piracy
Arab and Muslim role models
A Muslim and a Jew in the Desert Meet a Muslim Brotherhood

In a heartfelt statement, Patriarch Gregorios Laham, Melkite Greek Catholic Patriarch of Antioch and All the East, condemned the Nusra killing of the innocent 20 Druze civilians.

We applaud Patriarch Gregorios Laham for his condemnation of Jabhat al-Nusra’s terror. Here at Terror-Free Syria, we believe these acts of extreme violence must be punished severely when innocent civilians are involved.

However, we have a question for Partriach Gregorios Laham.

Where were you Your Eminence Patriarch Gregorios Laham when Assad gassed Syrian children and women with sarin in Ghouta in August of 2013? Did you also issue a statement condemning the terror of the Assad regime?

Where are you today Your Eminence Patriarch Gregorios Laham when Assad is barrel bombing innocent civilians in Idlib, Aleppo, and Ariha? Did the venerable Melkite Greek Catholic Church also issue a statement condemning the Assad terror against innocent civilians?

Where were you Your Eminence Patriarch Gregorios Laham when Assad killed unarmed Syrians marching in funerals to bury those Assad killed a day earlier? Did your voice of justice also rise in support of those Assad was butchering with total abandon? That was long before Islamic extremism snatched Syria.

Christianity is a religion of love and forgiveness, not opportunism and ideology. How do you expect Syrian Muslims to respect the Church if it takes sides with one terrorist against another? There is no room for terror in Syria, not Assad’s, not Nusra’s, not ISIS, and not Hezbollah’s.

American-Syrian Muslims, like ourselves, are opposed to the terror of Assad and ISIS, al-Qaeda and Hezbollah. Why is it so difficult for the Melkite Greek Catholic Church to condemn all terror like we do?

If the Maronites of Lebanon can oppose ALL terror, why can’t the Melkite, the Assyrian, and the Chaldean do the same?

The day we recognize this truth is the day we begin healing the Syrian nation.

Where Was Patriarch Gregorios Laham When Assad Gassed Civilians?