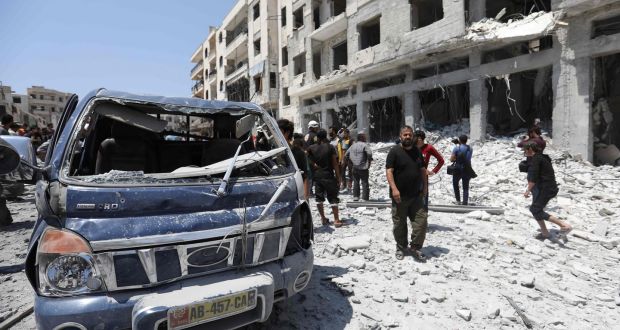 April 5, 2019 5:29 am 0
Breakthrough Cooperation to Weaken Iran
Syrian Defector Pleads With US Lawmakers to Stop Assad Terror
Aleppo is Costing Too Many Alawite Lives

Assad shelling Idlib civilians with missiles killed at least 17 civilians in the past 24 hours in different locations of northwest Syria. Half of the dead are under the age of 18. The shelling also wounded dozens in Kafr Nubl, where one missile hit a market, said Obada Dhikra, the director of civil defense service in the area. The number of dead could rise due to the severity of the injuries.

The northwest represents the last big piece of territory held by rebels opposed to Chemical Assad.

Last year, the Syrian government, backed in the war by Russia and Iran, intended to mount a major offensive into part of the northwest – Idlib and adjoining parts of Hama and Aleppo provinces – raising concerns of a humanitarian catastrophe.

But after Moscow struck a deal with Ankara that included the creation of a “demilitarized zone, Chemical Assad postponed the attack. Moscow is the government’s strongest ally. Turkey backs some rebel groups and has troops on the ground in the northwest.

Syrians living in Idlib refute the Assad family because of its torture dungeons and its brutal tyranny. Against anyone for any reason. The Assad family has ruled Syria since 1970 and has been responsible for killing and torturing over a million Syrians.

The northwest, including Idlib province and parts of Hama and Aleppo provinces, is home to about 3 million people. Idlib is also home to few thousand extremists fighting the brutal Assad regime. Half of Idlib population have already been internally displaced, the United Nations says.

Early this year, the jihadist groups in the northwest seized most of the enclave from other rebel factions. Turkish-backed insurgents hold an adjacent enclave in northern Aleppo province where there is no active fighting with the government.