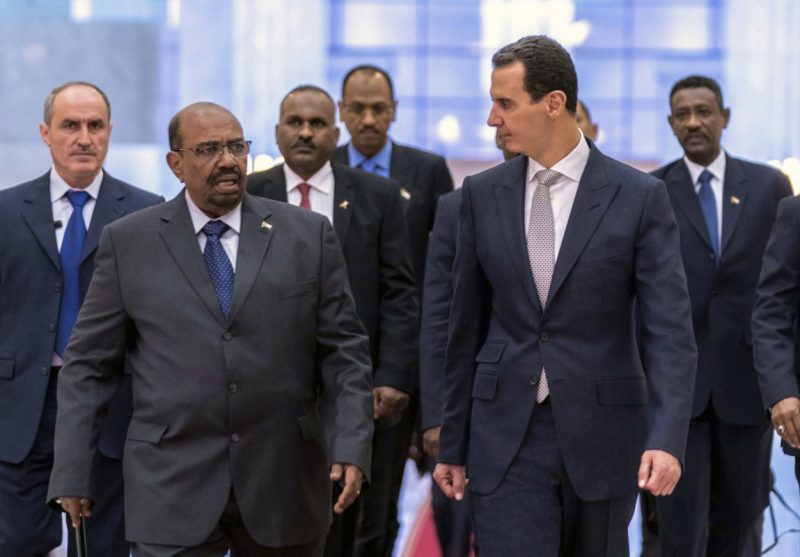 Assad has survived eight years of war and billions of dollars in money and weapons aimed at toppling him. Now he is poised to be readmitted to the fold of Arab nations, a feat once deemed unthinkable. With that move, Arabs remain living in the dark ages of mass murderers, corrupt monstrosities, and masters of their souls.

Gulf Arab nations, once the main backers of rebels trying to oust Chemical Assad, are lining up to reopen their embassies in Syria, worried about missing out on lucrative post-war reconstructive projects. Key border crossings with neighbors, shuttered for years by the war, have reopened, and Arab commercial airlines are reportedly considering resuming flights to Damascus.

And as President Donald Trump plans to pull out America’s 2,000 soldiers from northeastern Syria, government troops are primed to retake the area they abandoned in 2012 at the height of the war. This would be a significant step toward restoring Assad’s control over all of Syria, leaving only the northwest in the hands of rebels, most of them jihadis.

ASSAD IS TORTURING AND KILLING THOUSANDS OF POLITICAL DISSIDENTS. WORLD IS SILENT.

In the meantime, Assad henchmen torture and kill thousands of political detainees to cleanse the country from their opposition. Arabs remain living in the dark ages of their oppressors and killers. e it Islamist terrorists or secular terrorists.

It can seem like a mind-boggling reversal for a leader whose military once seemed dangerously close to collapse. But Russia’s military intervention, which began in 2015, steadily reversed Assad’s losses, allowing his troops, aided by Iranian-backed fighters, to recapture cities like Homs and Aleppo, key to his rule.

Assad rules over a country in ruins, with over 600,000 killed and half the population displaced. Major fighting may still lie ahead. But many see the war nearing its end, and the 53-year-old mass murderer is sitting more comfortably than he has in the past eight years thanks to Barack Obama abandoning the Syrian people to die through his sheer terror.

IT’S ABOUT LUCRATIVE CONTRACTS, NOT IRAN

A key motive for Sunni Muslim Gulf countries is to blunt the involvement of their Shiite-led foe, Iran, which saw its influence expand rapidly in the chaos of Syria’s war. Iran has entrenched herself in Syria.

After Assad led a crackdown on protesters in 2011, Syria was cast out as a pariah by much of the Arab and Western world. It lost its seat at the Arab League and was hit by crippling sanctions by the international community, as the U.S. and European diplomats closed their diplomatic missions.

A Saudi attempt to patch up relations with Assad would be a public acknowledgement of the kingdom’s failure to oust him. This is the same kingdom whose leader has killed and dismembered a political dissident in Istanbul on October 2, 2018 named Jamal khashoggi. At the same time, the involvement of Gulf Arab governments and private companies is crucial for any serious reconstruction effort in Syria. Experts estimate reconstruction costs could run up to $1 Trillion.

MASS MURDERERS SCRATCH EACH OTHER BACKS

Last month, Sudanese President Omar al-Bashir, himself a criminal indicted by the Hague for crimes against humanity, flew to Damascus on a Russian jet, becoming the first Arab leader to visit Syria since 2011. The visit was largely seen as a precursor for similar steps by other Arab leaders. Arabs remain living in the dark ages, and they are getting darker every year.

On Dec. 27, the United Arab Emirates reopened its embassy in Damascus with a public ceremony. It represented the most significant Arab overture yet toward the Assad government, almost certainly coordinated with Saudi Arabia. The Bahrain Embassy followed the next day. Arabs remain living in the dark ages and in total submission to strongmen who cannot pass 6th grade spelling test.

The debate now appears to be about when, not whether, to re-admit Syria to the Arab League. At a meeting in Cairo on Wednesday, Egyptian Foreign Minister Sameh Shukri said developments on the political track will create the conditions to return Syria to the League. Some officials in Lebanon insist the Arab League should invite Syria to an Arab economic summit the country is hosting.

AMERICA LEFT THE MIDDLE EAST TO PUTIN, A THUG

The Arab overtures come amid a shifting landscape in the Western world.

The planned U.S. pullout from Syria is part of Trump’s “America First” policy. Trump has repeatedly said he won’t remove Assad from power probably as a favor to Putin. He also refuses to keep American troops involved in “endless wars” in the region.

Right-wing parties and populist movements on the rise in Europe are also on friendly terms with Assad. They all see him as a secular bulwark against Islamic extremists. Those are the same right-wing parties who have received funds and support from another mass murderer named Vladimir Putin.

For Syrians who rose up against Assad’s rule, it can seem like the country is drifting backward; just like eight years ago. Only with half a million dead and cities in ruins. In addition to acts of revenge Chemical Assad is exacting on those who dared to rise against his terror.