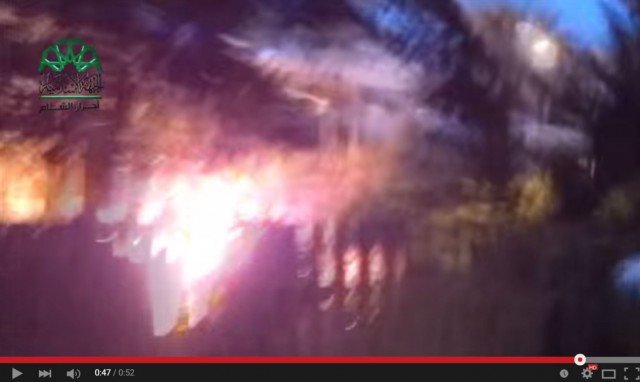 A Syrian brigadier-general was killed in a blast that targeted his car in downtown Damascus on Sunday, Activists on the ground told AFP.

The activists said “a brigadier general and approximately six people with him were killed in an explosion in the Adawi neighborhood in the center of the capital.”

The powerful Ahrar al-Sham rebel group posted a video online (See below) claiming to show the attack on Brigadier-General Bassem Ali Muhanna’s car with an improvised explosive device, in the early hours of Sunday.

A security source said Muhanna was a member of the Republican Guards, an elite unit of the army. He hailed from Safita, near Tartous where the Russian navy made it its home.

But state media said the helicopter had suffered technical problems.

IS had brought down the helicopter after midnight near the Kweyris air base in the east of Aleppo province. At least one crew member had been killed but “the fate of the rest is unknown”.

Jihadist accounts on Twitter said IS had downed the helicopter using anti-aircraft missiles.

They posted the names of three crew members they said had been killed and pictures of a helicopter in flames.

State television said, however, that “a helicopter crashed after takeoff from Kweyris airport in Aleppo province because of technical faults and the crew were killed”.

IS fighters have surrounded the air base since March 2014 and have fought fierce clashes with its garrison.

The government has used helicopters to drop so-called barrel bombs on rebel-held areas of Aleppo province.

The crude weapons — made from oil drums, gas cylinders or water tanks, packed with explosives and scrap metal — have killed hundreds of civilians, drawing condemnation from human rights groups.

Elsewhere, the toll in regime air raids on Saturday in the eastern city of Deir Ezzor rose to 16, including six children from one family.

IS jihadists control most of Deir Ezzor province, including more than half of the provincial capital, which sits strategically on several key highways.

Also Sunday, state television reported what it called a “massacre” in the city of Palmyra, which was captured by IS on Thursday.

But activists said there was no evidence of such mass killings.

“Several dozen people accused of ties to the regime have been executed, but the number does not exceed 35 since the town was captured,” the activists on the ground told AFP.