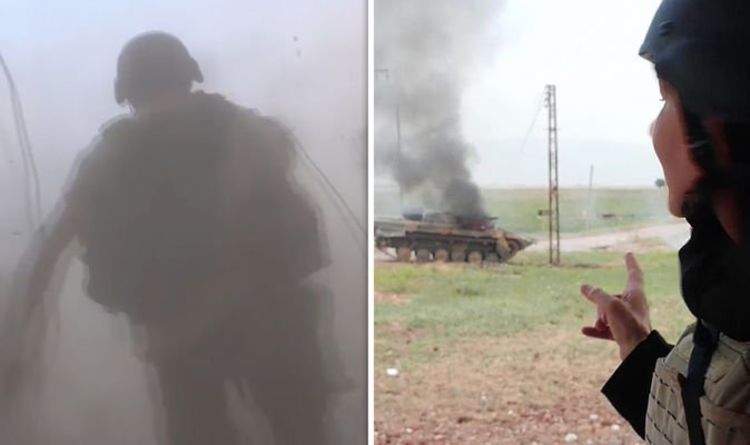 May 24, 2019 6:07 am 0
Possible Doomsday for the Assad Evil Regime
Does Anyone Really Believe Assad Has Won in Syria?
Mohammad bin Salman Assad Secret Rapprochement

The dramatic video as posted by Sky News on Twitter.

This is the moment Sky News’ crew in Idlib was targeted and fired upon by Syrian regime forces.@AlexCrawfordSky says they were attacked with tank shells, as an activist they were travelling with was hit by shrapnel.

In the case of Marie Colvin, a court awarded her family $300m, but unless western politicians take the steps to remove him from power deliberately and forcefully for the family to access the funds, the court order is largely symbolic.

We believe Assad is targeting British journalists as pay back for Britain’s freezing of bank account of his niece Aniseh Shawkat. Britain acted upon the sanctions it levied against the Assad regime for crimes against humanity. His niece is daughter to another mass killer who died from a bomb the free Syrian Army planted. Ms. Shawkat has been living in London for years. She has been receiving approximately $175,000 a year as a student.

The independent of London wrote:

Ms Crawford was reporting in Idlib, the last rebel outpost in Syria, when she and her colleagues came under attack – despite being marked as press. Dramatic footage captured the moment they were attacked with tank shells. One of them screamed: “Go, go, go!” As they tried to escape, a military drone tracked them. A panicked Ms Crawford asked: “Where are we going? Where are we going?”

Incidentally, we are certain the death of Marie Colvin flashed before Ms. Crawfords’ eyes as she tried to escape the Assad shells.

BRITAIN MUST LEVY PENALTIES AGAINST THE AKHRAS FAMILY

Britain must take the steps to levy sanctions against every trace of the Assad family in Britain; to include his in-laws the Akhras family who live largely unaffected by what their son-in-law murderous ways.

The Akhras have been instrumental in channeling funds to British politicians in an attempt to buy their security. This must stop. Assad must know that if he targets British citizens, the price is high sky to pay.