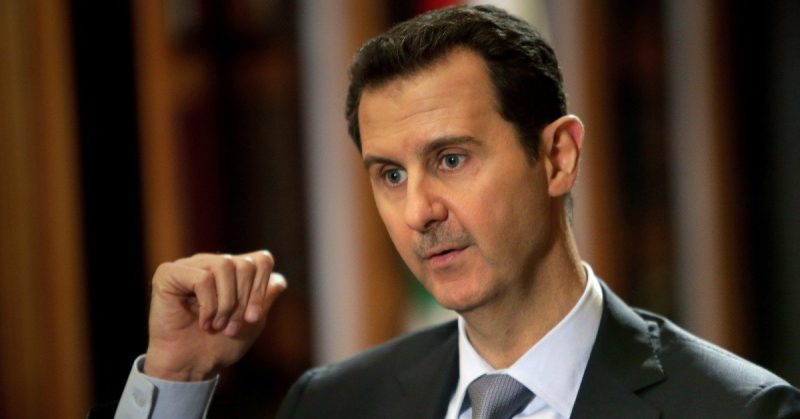 Assad Shelf Expiration Date Is Way Past Due

April 20, 2019 9:00 pm 0
Salute the Alawites Revolting Against Assad
No Security For Assad When Rockets Land in Damascus
Aoun is Acting Like Little Khamenei

Reuters published an article in which it detailed what it called “Assad peace talks discussion”. If one did not know any better, one would actually believe him to be capable of compromise to achieve peace. Syrians, however, know that Assad shelf expiration date is way past due.

Credit Reuters, though, for it also pinpointed to Assad’s incapacity to compromise in this paragraph:

Moscow has pushed for a political process involving talks on a new constitution and elections as a way to end the conflict, but Assad has played down the possibility that the Turkey-backed opposition or foreign countries might participate.

This is what compromising with oneself looks like. No opposition. Just me talking to me about peace and compromise.

Although the Turkish-backed opposition Reuters fails to mention is the Muslim Brotherhood, the fact Assad will not negotiate with the very same western countries choking his economy to death demonstrates amply that Assad shelf expiration life is past due. He remains stuck in ideological La La land.

Nothing in Assad’s education, upbringing, behavior, or mindset showed him capable of compromise. Just the opposite. Every speech he makes is about his way or the highway. Every single one bar none.

Excuse the Syrian opposition for laughing when it reads articles about Assad discussing peace. And pity those who believe Assad is capable of striking a balanced peace.

The Syrian opposition is full of liberal and secular leaders. Many of them Russia recognize as moderates capable of maintaining the country free from violent religious zealotry. Assad wants the world to think he is opposing the Muslim Brotherhood when in fact his biggest fear is the rise of the liberal opposition he tried to disseminate over the last eight years. And those are the ones Russia does not mind Assad sharing power with. However, Assad fears they could replace him one day. Not so with the Muslim Brotherhood he pretends he is unwilling to share power.

This means he has some ruse up his sleeve we believe the Russians won’t tolerate. It won’t be long before Putin recognizes, as well, that Assad shelf expiration date is also past due. Maybe Russia pushing for peace is intended, in the long-run, to do away with Assad. His closeness to religious Iran makes everyone uncomfortable, including Vladimir Putin.

Assad is smelling just like a Vieux-Boulogne cheese in the open. Timk to throw away the garbage.

Assad Shelf Expiration Date Is Way Past Due