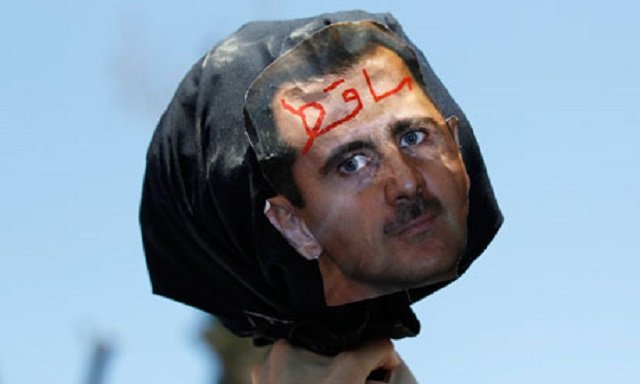 Syria Letter: ‘Dear World, Save Us From Assad’

October 21, 2013 9:14 pm 0
Syrian Doctors to Show the US Evidence of Assad’s Use of Chemical Weapons
Assad for Nobel Prize in Chemistry
For Syrians to Upstage Assad, Israel Must Take Their Side

Residents of a Syrian suburb have written a letter to the world asking for help to save them from starvation and the threat of constant attack from the Assad regime.

For nearly a year, they say, Assad’s forces have blocked food and medical supplies, denied them electricity and fuel and pounded them with shells and artillery fire. The Syria letter that said “Dear world, save us from Assad”.

Some 3,000 civilians fled to safety last month in a planned evacuation during a rare ceasefire; however, another attempt earlier this week collapsed as clashes forced hundreds of women and children gathered at a checkpoint to flee.

It is estimated around 12,000 people are trapped in conditions that are becoming increasingly desperate.

In an open Syria letter circulated by the main Western-backed opposition group, the residents of Moadamiyeh write: “Save us from death. Save us from the hell of Assad’s killing machine.

“For nearly one year, the city of Moadamiyeh has been under siege with no access to food, electricity, medicine, communications, and fuel.”

The Syrian National Coalition, the main umbrella group for the opposition, called on international organisations to establish a humanitarian corridor to allow food into the area.

At the weekend, the United Nation’s humanitarian chief Valerie Amos called for an “immediate pause” in clashes to allow civilians to leave.

Spokesman for Moadamiyeh council Qusai Zakarya confirmed that local residents had sent the Syria letter to the opposition coalition asking for help.

He said: “We are heading toward a definite destiny: starvation. Please, we are begging you to enter and distribute food. Residents are living on boiled grape leaves and olives.”

Their plea came as Assad said he saw no reason why he could not run for the 2014 presidential elections – after nearly three years of civil war.

Assad inherited power from his father in 2000 and was confirmed in a sham election in which he ran unopposed. He was re-elected in 2007.

The conflict, which began with largely peaceful protests in March 2011, escalated into a civil war that has now claimed the lives of more than 100,000.

On Monday the UN official leading the mission to destroy the country’s chemical weapon stocks arrived in Damascus.

Syria Letter: ‘Dear World, Save Us From Assad’