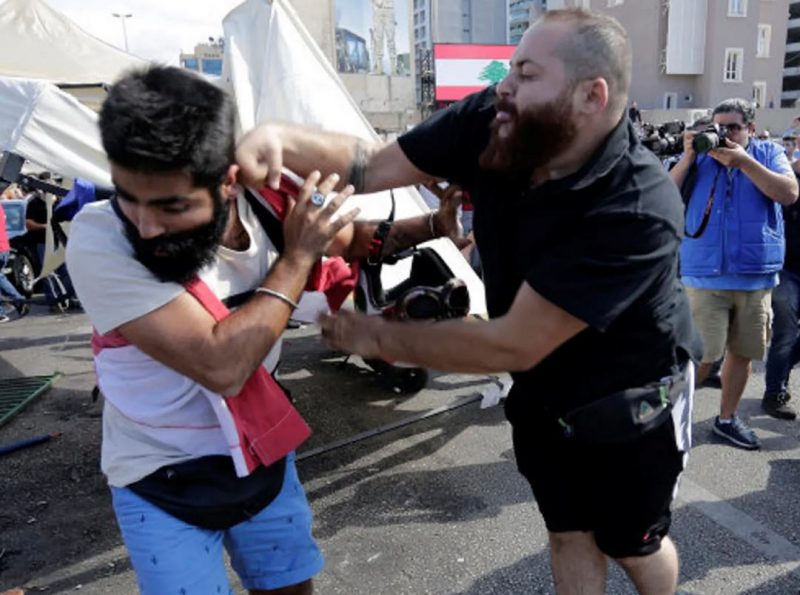 Keep the Pressure on Hezbollah

November 3, 2019 2:14 am 0
Most Corrupt Man in Lebanon Says Country is a Sinking Ship
Will Clown Aoun Pivot Away From Hezbollah?
Axis of Self Destruction Is Working to Bust US Sanctions

If one discounts the Assad regime and the Islamic State, Hezbollah is, by a mile, the most horrible organization to have ever existed in the Arab world. Like Baschar al-Assad and Abu Bakr al-Baghdadi, Hassan Nasrallah’s hands, the terrorist who heads the organization, drip with the blood of the innocent. To keep the pressure on Hezbollah is necessary to eradicate its evil. One that is collapsing a democratic gem in Lebanon.

Hezbollah exists to destroy, kill, and spread chaos. Its loyalty is to Iran even though its members are Lebanese citizens, which pretty much summarizes why it is slowly destroying Lebanon. It also explains why the Lebanese people are revolting having seen first-hand Iranian hegemony choke their country.

Hezbollah’s oxygen is to see all those opposing Iran suffer, which makes it stronger and Lebanon weaker. It also provides the terror organization with more control for Iran. The less the country is capable of defending itself, the stronger Hezbollah looks. This is how Tehran keeps its dirty fingers in Arab dough by manipulating outcomes to further its vile agenda.

KEEP THE PRESSURE ON HEZBOLLAH

Lebanon is a special country. What other Arab countries may take for granted, Lebanon considers the freedom of its citizenry to be a sacred covenant. It is embedded in the history and culture of its existence. While women, under the Houthis in Yemen and the Iranian-backed militants in Iraq, are subject to total control, Hezbollah would never dream of infringing upon such sacred liberties in Lebanon. It can kill and spread chaos, but Hezbollah could never subject Lebanon to what Tehran subjects the Iranian people to endure.

For it not for Hezbollah’s incompetency to govern, Lebanon would not be suffering from economic meltdown today; nor would it be enduring tangent possibilities all foreign to the core beliefs of its people. Some of these possibilities were witnessed in the form of Hezbollah thuggery attempting to silence the protesters.

What makes Lebanon special are the minorities maintaining its cultural integrity and independence. Without them, Lebanon is just another Yemen falling prey to extremist religious identities and behavior. If one discounts some of the pro-Hezbollah elite Maronite Christians, like Michel Aoun, that Hezbollah installed as Lebanon’s president, the rest of the minorities, be it Christian or Druze, hold Lebanon together by institutionalizing freedom and liberty.

While a Muslim soul is prone to yield to Allah’s will, Lebanon’s minorities will not yield to Hezbollah’s when it comes to their own enduring and timeless emancipation. This core fact limits Hezbollah’s capacity to harm the Lebanese, but not its capacity to harm Lebanon. Something we have watched happen in slow motion over the last thirty years of Hezbollah’s existence.

The West must protect Lebanon’s minorities from Hezbollah because their culture has great impact on the region. Credit the Lebanese minorities for making Dubai an internationally celebrated destination — with a willing ruler and no Hezbollah-like organization to spoil their value. In Dubai, you will find more Lebanese minorities working to build the country than in any other Arab country. We cannot ignore their contribution for a better region.

BRING THE HAMMER DOWN

The United States has contributed immensely to limit Hezbollah’s terror. Mostly, through sanctions and international pressure. This is not enough though. The United States must bring the hammer down on Hezbollah by mirroring and enforcing the same sanctions it has levied against Iran. We must stop Hezbollah by any mean possible to weaken its political grip and to bankrupt its operations.

Anything short of that would be a big disservice to the Lebanese people and its minorities carrying the torch of anti-extremism and hostility towards the West.

Keep the Pressure on Hezbollah