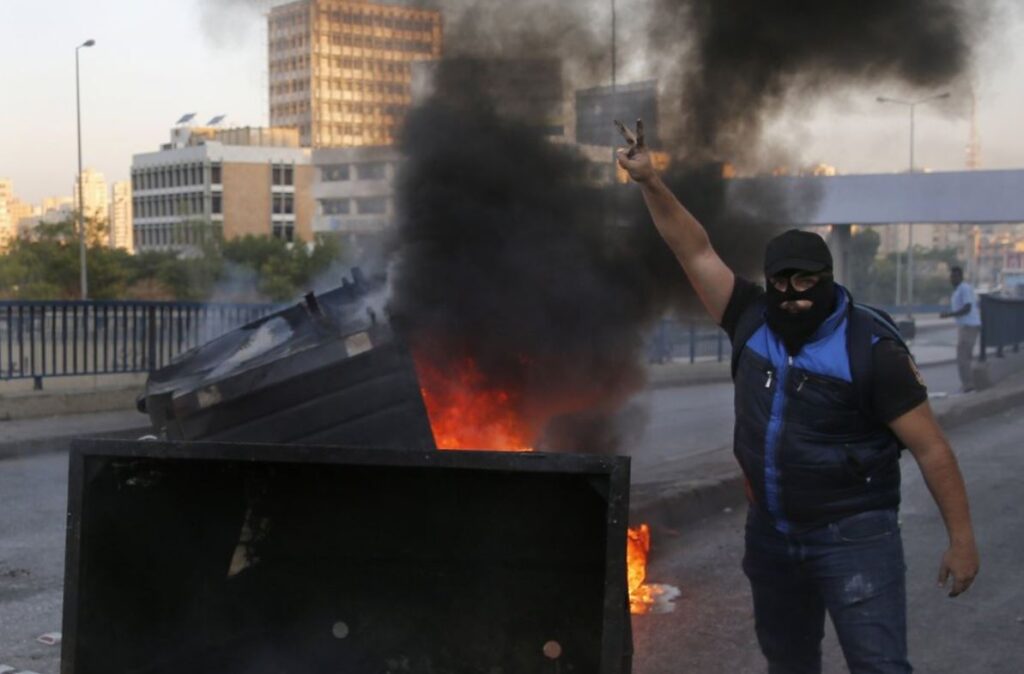 Protesters blocked roads in Beirut and other parts of Lebanon on Monday, pressing a wave of demonstrations against the ruling elite that have plunged the country into political turmoil at a time of acute economic crisis. As Lebanese Protesters paralyze Beirut, terrorist Hezbollah believes it can wait them out.

The nationwide protests, which were ignited on Oct. 17 by a government proposal to increase taxes, which inevitably end-up in Hezbollah’s coffers, led Saad al-Hariri to resign as prime minister last week. There has been no sign of progress yet toward agreement on a new government.

After Hariri quit, protests had ebbed, roadblocks were lifted and banks reopened for the first time in two weeks on Friday.

But in the early hours of Monday, new roadblocks emerged on in Beirut and around the country. They snarled major traffic arteries including the main seaside highway north and south of the capital. Schools called off plans to reopen and are now in their third week of closure.

The slogan is ‘this revolution doesn’t know sleep, form the government today. “People are continuing because you know you can’t trust this regime, any part of it.

Adnan is demanding a new cabinet independent of the political elite which protesters accuse of corruption; as well as steering Lebanon into economic crisis.

In the northern city of Tripoli, demonstrator Rabih al-Zein said protesters had escalated again because they do not trust the ruling elite to meet demands for a new administration that will act against corruption.

We want technocrats (in government) and we want judges to fight corruption, recover stolen money and hold the government accountable.

Lebanon is grappling with the worst economic crisis since the 1975-90 civil war. With growth around zero percent, a slowdown in capital inflows has led to a scarcity of U.S. dollars. This placed pressure on the pegged Lebanese pound.

The pound, pegged at the official rate of 1,507.5 pounds to the dollar for 20 years, has strengthened since Hariri quit.

A dollar cost 1,680 pounds on the parallel market on Monday, a foreign exchange dealer said. The day Hariri quit, dollars were being offered at 1,800 pounds.

PROTESTS AT BANKS IN SIDON

Because of Hezbollah and its cronies, Lebanon is one of the world’s most heavily indebted states. It needs urgent reforms to narrow the government’s gaping deficit and revive confidence.

Though no formal capital controls were announced, customers encountered new restrictions on withdrawals of U.S. dollars and transfers abroad when the banks opened on Friday.

Protesters in the southern city of Sidon mobilized outside government-run agencies and commercial banks on Monday. they forced them to close, a witness said.

Hariri continues in a caretaker capacity until the formation of a new government.

A senior official familiar with Hariri’s thinking told Reuters last week he was ready to return as prime minister. Hariri, however, conditioned his return on selecting a new cabinet to include technocrats. He also demanded the ability to implement urgently long-stalled economic reforms.

Aoun, a Maronite Christian allied to the powerful, Iran-backed Shi’ite group Hezbollah, is stalling. He has yet to begin the formal consultations with MPs to designate the next prime minister.

On Saturday, the presidency said he was working to resolve “complications” first and would start the consultations soon. The majority of Lebanese do not trust Aoun because of his ties to Hezbollah and Iran.

Supporters of Aoun staged a big rally near the presidential palace on Sunday. A tactic the Assad regime deployed on several occasions during the Syrian Revolution.