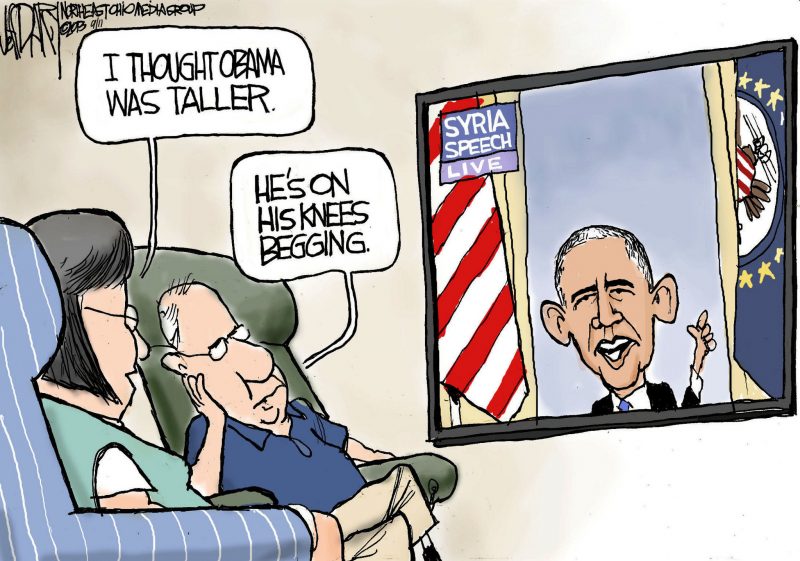 As Syrians reflect upon the costs of relying on American flip-flop diplomacy, it is important to understand why we lost Syria.

We lost Syria for multiple of reasons. But one stands out above the rest. America’s allies can rely less on Washington than Damascus relies on Moscow or Tehran. The Democracy Syndrome we enjoy at home is animus to our allies. Every U.S. President has an agenda, and every administration brings new ideas to the table. Accountability forces our politicians to kick the can, and public opinion could swing the rudder 180 in weeks on any policy. Mid-term elections are always around the corner.

When the Syrian Uprising began March 2011, President Obama’s agenda was to shrink American footprint on the international stage to mitigate the risks of new wars. We lost Syria because no gassing of innocent civilians or devastating barrel bombs decimating children could persuade him to save the civilians from fleeing. Under his administration, we saw precisely what lack of leadership on the world stage could mean to those suffering the tolls of wars.

In fact, Obama made things worse by empowering Iran, which was committing atrocities in Syria. Furthermore, he opened the floodgates for Russia to occupy the Syrian space he ignored to fill through a No-Fly zone. Such endeavor would have cost us no lives and no treasure (Saudi Arabia was willing to cover all its expenditures). More importantly, a No-Fly Zone would have stemmed the flow of refugees to Europe, which indirectly helped the far-right, pro Putin political parties to gain in polls. We should all thank Barack Obama for Vladimir Putin’s storming the international stage. Why we lost Syria? Don’t tell Ben Rhodes. He is still trying to figure out what went wrong with Russia.

Our allies, no matter how hard they pressed Obama’s administration, were mostly ignored; so was the Free Syrian Army. The FSA was a legitimate organic and secular alternative to Assad, which rose before Assad began fostering Islamic terrorist organizations. In short, Barack Obama is one reason why we lost Syria and why Putin is so powerful today.

When Assad and Putin began to free religious fundamentalists (i.e. ISIS) from their prisons to fight the moderates, Barack Obama simply stood by. Instead of helping the FSA defeat Assad and then turn his attention to ISIS, Obama attacked ISIS leaving the head of the snake in Damascus to win. Why we lost Syria is because Obama’s priorities were tuned to please Iran. They were not set to defend America’s interests.

After Obama helping Iran, the U.S. elected, with Putin’s help, an ally of his to the White House. While Obama did not foresee the grave mistakes his policies were causing indirectly, President Trump knows exactly what he is doing when he abandoned Syria to Putin. Why we lost Syria is a combination of dumb policies and moronic intent. On the part of two successive and foolhardy Presidents.

Syria, in U.S. orbit, would have become a shield against Iran in the region. Kiss Hezbollah goodbye. Israel would worry far less about a northern border war. Just like it worries little about its western Sinai flank today. Putin would still be in Moscow instead of occupying, side-by-side, the international stage with America.

Why we lost Syria is mainly because we had one bad U.S. President with a very short vision and a cowardly disposition. And another worse one who defends Vladimir Putin more than he defends American interests and institutions.