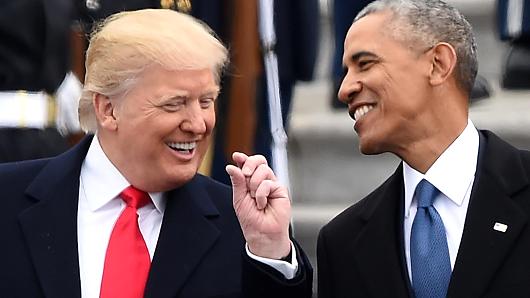 April 5, 2018 11:07 am 0
Russia Helped Trump Rise, China is About to Bring Him Down
Was Obama Syria Policy Partially Responsible for the Benghazi Tragedy?
Ecce Homo Donald Trump You Idiot Supporters

In November of 2017, we wrote a Blog we titled “On Middle East, Donald Trump is a White Barack Obama” in which we argued that both presidents have similar views and purpose. We followed with another we titled “Putin Shows How Dumb Donald Obama Lite Trump Has Been” in which we made similar arguments. In our opinion, Barack Trump and Donald Obama are one and the same person. When it comes to Middle East policies, that is.

Many of our readers, who happen to be avid Trump supporters, disagreed with both Blogs. They argued that Trump has been more forceful because he bombed the airport in Syria. The airport the United States bombed was used to deliver chemical weapons against innocent civilians. However, after Trump announced his willingness to pull U.S. troops out of Syria, some of these readers are beginning to understand our Blogs. They are seeing what we saw from the beginning. Barack Trump and Donald Obama are one and the same person when it comes to Middle East policies.

Both presidents have carried the water for our enemies. Obama made it his mission to empower the Mullahs to wreak havoc in the region.  Without any care in the world what Iranian terror might cause. Trump is making it his mission to improve relations with another enemy Vladimir Putin. An enemy who gassed his own people on foreign soil. This excessive tendencies to please our most violent foes is causing much consternation in the intelligence and foreign relations establishments.

Since a terror-free Syria is essential to safeguard our allies Lebanon, Israel, and Jordan, any Syrian policy moves is bound to affect their safety. Especially, since the Ayatollahs of Iran have planted their ugly feet in Syria with the purpose of perpetuating violence. The non-interventionist policies Obama pursued to please Iran are being duplicated by Trump in pursuit of secretly pleasing Putin.

The rift between Trump avid supporters and the president are beginning to show. Jennifer Rubin wrote an article for the Washington Post she titled “Trump is as bad if not worse than Obama on Syria“. In it, she writes:

Former U.S. ambassador to Turkey Eric S. Edelman tells me that this is “more evidence of the essential continuity of Obama and Trump’s policies in the Middle East.  The rhetoric is a little different, particularly on JCPOA, which Trump may walk away from, but even at the rhetorical level Trump sounds an awful like Obama saying we need to do nation-building at home.

Many people inside the beltway believed that Jared Kushner, Trump’s son-in-law, would be able to temper Trump’s positions with regard to our allies. As his Middle East adviser, Kushner’s position mirrors those of Syrian oppositionists, Saudi supporters, and many Israeli politicians.

Today, it is obvious to many that Trump only listens to those who give him the most love and praise. Syrians and Israelis tend to wrap their love with requests and wishes. Trump, apparently, seems to dislike conditional love. He relishes the unconditional love his rallies bring out in force.