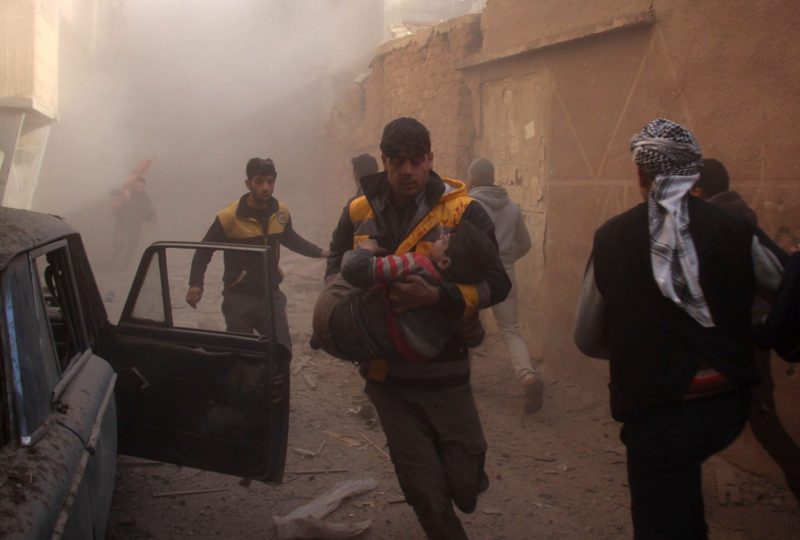 Putin Shows How Dumb Donald Obama Lite Trump Has Been

President Barack Obama’s policy with regard to Syria has been one of the worst in America’s foreign policy history. We all know the reasons though. Barack Obama wants to use Iran as a proxy to terrorize Israel. Considering how President Trump is behaving on Syria so far, he is not far behind BO. In fact, once again, Putin shows how dumb Donald Obama Lite Trump has been in defending America’s interests in Syria.

The difference between the two presidents is clear. Barack Obama has an obsession with the State of Israel he empowered the Mullahs of Iran to threaten for generations to come. Call it twisted but at least the man is pursuing a clear goal with an end that suits his political ideology.

Trump, on the other hand, is obsessed with Putin for no reason that we know of, which makes the Russian collusion investigation so important. Why is Trump permitting Russia and Iran to make further gains in Syria at the expense of our allies like Saudi Arabia and Israel? There is not even a hint of an explanation except Trump’s love fest for Putin. How can one ignore the notion that Putin holds Damocles sword over Trump’s neck, which is paralyzing the president?

Below is a Washington Post editorial that pretty much summarizes the lack of action by dumb Donald Obama Lite Trump on Syria.

Russia has fooled the U.S. again in Syria

LAST YEAR Russia brokered a series of cease-fires, or “de-escalation zones,” in Syria, including one with the United States covering the southwest corner of the country. The Kremlin claimed its aim was to wind down the country’s civil war and lay the groundwork for a peace deal between the regime of Bashar al-Assad and rebel groups, some of them Western-backed.

Longtime observers of the Syrian war wondered if the cease-fires, like many previously agreed to by Russia and the Assad regime, would be broken as soon as the allies were prepared to launch new offensives against rebel-held areas. But President Trump and his aides expressed optimism that Russian President Vladi­mir Putin was sincere. “If we get .?.?. a few more [cease-fires], all of a sudden we are going to have no bullets being fired in Syria,” Mr. Trump said in July. “I think there is a level of commitment on the part of the Russian government,” said Secretary of State Rex Tillerson.

The administration should now be discovering, as the Obama administration did before it, just what Russia’s word in Syria is worth. With heavy Russian air support, Syrian government forces have been conducting new offensives against two of the de-escalation zones, the Damascus suburb of Eastern Ghouta and the northern province of Idlib. As in the past, the tactics include war crimes, including the deliberate bombing of hospitals. In Idlib, where hundreds of thousands of Syrians took refuge during previous stages of the war, another mass exodus is underway, with more than 100,000 people fleeing north toward the Turkish border.

The onslaught in Idlib has drawn sharp protests from Turkey, with which Russia brokered the cease-fire in the area. Russia, in turn, has complained about attacks on one of its air bases using primitive drones of unknown origin. The Trump administration, meanwhile, is doing its best to ignore the new bloodshed. Officials are playing down the Idlib fighting on the grounds that the area is dominated by al-Qaeda-linked rebel groups.

That explanation, which has been the standard excuse of the Assad regime and Russia for breaking previous commitments, is all too convenient. While extremist groups control a large part of Idlib, Turkey says moderate Free Syrian Army units are involved in the fighting — an assertion that we also heard from several FSA leaders now visiting Washington.

The mass of refugees being driven toward Turkey, with no protection from the winter weather, are not terrorists. And if the offensive is successful, the result will be the further entrenchment in Syria of not just Russia but also Iran, the Assad regime’s closest ally.

The United States, in short, stands to lose — again — to Russia in Syria. The Assad regime is relentlessly seeking to restore its control over the entire country by force, and Moscow is actively abetting it. By declining to challenge or even protest this brutal strategy, the Trump administration reveals its weakness.

Dumb Donald Obama Lite Trump is looking more and more suspicious when it comes to Syria and his total apathy towards Russia’s Putin. If Putin holds some information that is compromising our president, it is high treason for Trump to continue leading as President of the United States of America.

Because it sure looks like Trump is acting more in Russia’s interests than the United States’.

Putin Shows How Dumb Donald Obama Lite Trump Has Been