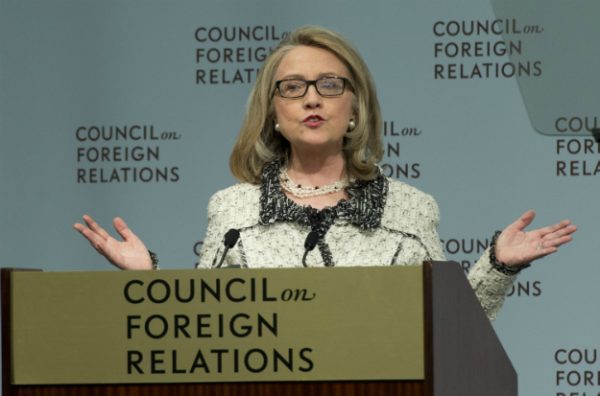 We read this article in the NY Times in which Secretary Clinton, speaking before the Council on Foreign Relations, was compelled to lamenting diplomatic failures to stop the carnage in Syria.

As Secretary, Mrs. Clinton takes her marching orders from the President; and while many may blame her for Syria, we do not. Saying Assad is a “reformer” in the midst of killing his own people was a mistake. However, one has to give her the benefit of the doubt while staying cautious.

Will she act in the same manner, as Commander-in-Chief, will be the question many internationalists need to ask themselves. The problems the region will be facing between now and 2016 will acutely increase.

After all, it was her husband, President Clinton, who saved the world from Milosevic.  We tend to think had she been in control of the Syrian file, she would have administered a similar necessary medicine to kill the Assad virus.

The last few paragraphs of the NY Times article spell the failure clearly:

Mrs. Clinton said she believed that she had made headway with the Russians over the past year in fashioning a plan for a post-Assad transition in Syria. But it quickly emerged that the Russian government had not dropped its support for Mr. Assad.

Despite her complaints over continued Russian support for Mr. Assad, she voiced hope that the Russians would change their position.

Looking back on her years at the State Department, Mrs. Clinton said she had done everything she could to tamp down the Syria conflict by working to organize the Syrian opposition, backing humanitarian assistance and working to isolate Mr. Assad.

“I’ve done what was possible to do,” Mrs. Clinton said.

At the same time, she acknowledged that the situation there had the potential to get much worse.

“The worst kind of predictions about what could happen internally, and spilling over the borders of Syria, are certainly within the realm of the possible now,” she said.

Lamenting diplomatic failures over Syria could be boring to those of us immersed in the Syrian conflict; however, it is the only way to get across the message of how weak Barack Obama has been as President.

Had the Obama Administration ventured outside its lambskin to show political determination, instead of political weakness, by arming indirectly the liberal-minded Free Syrian Army as soon as defections started to materialize, not only many more would have defected, but it would have also accelerated the demise of the violent, anti-American Assad regime. It would certainly have nipped at the bud the extremism that followed to fill the big vacuum left by the Syrian policies of Obama.

Instead, we stand in front of the world lamenting our weakness and our incapacity to shape history for the better.