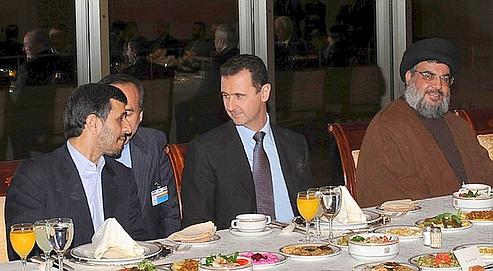 Conflicts in the Middle East rise often when one rogue Arab leader attempts to rely economically on the basis of one of the main Middle East industries, which are religion, terror, and WMD.

The Gulf countries have oil, in addition to the legitimacy of bearing the flag of Islam to shield their rulers from harm (As long as they don’t pursue terror or WMD); but many non-oil based economies of Arab rulers pursue either terror or WMD, or both, to threaten others with. When they do, conflicts arise because WMD is a major threat. Its defenses are the weakest targeting the highest numbers of soldiers and/or civilians.

This makes Iran an unprecedented threat because it is an oil-based economy and the religious center of Shia Muslims in pursuit of both terror and WMD; and using all to threaten other countries with. No other regime in the region utilizes its capabilities to the fullest like Iran to serve its twisted goals. There is a good reason when war wages in Africa or the Levant, eyes remain fixated on Iran by countries like Saudi Arabia and Israel.

Assad, as a proxy warrior to Iran, makes his regime a real threat because of Syria’s proximity to US allies like Jordan and Israel as well as to a democracy in Lebanon. How could the Obama Administration not realize the opportunity it has to dismantle the Assad regime is truly tragic. However, this opportunity is long gone by now. Dangerous elements have filled the vacuum. They are fully capable of duplicating another 9/11. Unfortunately, under the nose of an administration that believes scratching the back of a hyena can keep it safe.

Given the wars, the fall outs, and the pressure that could mount against rogue rulers, it is simply amazing how lessons of the past have so little impact on their rational. Saddam Hussein was captured in a hole shaking violently from fear because he killed his people with WMD.

Gadhafi, who pursued both terror and WMD, was captured by his people. Gadhafi’s  eyes, before his death, showed more fear than a little school boy facing a bully.

Yet, with all these images and violent conclusions to unworthy lives, violent rulers believe they can survive because of their cruelties and rampant savagery. Little do they know how patient are deer hunters.

Jordan under King Abdullah, Morocco under King Hassan IV, Egypt when it was under Mubarak, and Lebanon because of its own checks and balances — until Hezbollah showed its ugly face –, are all peaceful countries who do not trade with the main Middle East industries to threaten anyone. Saudi Arabia and Qatar, like Iran, use extreme religion to spread wings to fly to places they have no business to fly into.

September 2001 could have destroyed Saudi Arabia had it not been for its deep history and Bandar Bin Sultan. However, the Muslim Brotherhood organization will destroy Qatar, either directly or indirectly, because of its size.

We hope Assad, Nasrallah, and Khamenei will be the last Middle Eastern bullies on the block. Assad is a dead man walking. Eventually, the regime in Iran will follow because reason and rational will outlive any negotiations by a President due to leave office in 2016.

Do you remember that picture of Assad, Ahmadinejad, and Nasrallah dining in Damascus looking like cats swallowing canaries? Today, one is battling for his life; one is in a hole; and the other frozen in time waiting for his fate.

The first step in fixing the vast problems of the Middle East is disposing of those pursuing terror and WMD.