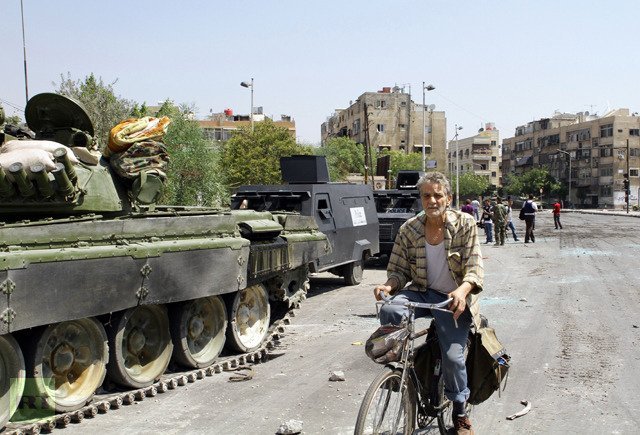 June 12, 2015 4:18 pm 0
More Like a Genocide than a Civil War
In-fighting Among Assad Loyalists on the Rise
What Have the Sunnis of Syria Done to Deserve Ethnic Cleansing?

In an interview with Reuters in Damascus, Assad regime official Faisal Mekdad acknowledged insurgent gains, but said the Syrian government has come through worse phases in the four-year-old conflict than the latest advances by insurgents across the country.

What those difficulties are is anybody’s guess. Our guess is that Asma al-Assad is having a hard time shopping online with all the cannon noise around her.

In general, Western officials believe losses in recent months by Assad’s government could signal a shift in momentum after a long period of stalemate in the four-year-old conflict.

Assad’s government has lost ground in recent months both to Islamic State fighters that are being targeted by U.S.-led air strikes and to other insurgents, some of which are supported by Arab allies of the West.

Not so said Mekdad.

“I think Syria was under more pressure (before). Even Damascus was under a direct threat. Nowadays Damascus is absolutely not under such a threat. Homs is safe, Hama is safe, now al-Qalamoun is safe”

Someone should remind Mekdad and Assad that in Syria, it’s a numbers game, stupid!

Let us do the math.

It’s a numbers game if you consider the war is taking place on Arab soil, in a Sunni-majority country, and surrounded by majority Sunni Arabs numbering 350 millions.

Non-Arab Iran has no chance in hell administering its non-Arab culture on Arabs.

Even ten years old in Syria can see it’s a numbers game.

The Syrian civil war has killed about 300,000 Syrians and created what the United Nations describes as one of the worst refugee crises since World War Two.

Mekdad blamed the insurgent advances on a new alliance between Syria’s regional foes Saudi Arabia, Turkey and Qatar, saying it was supported by the West.