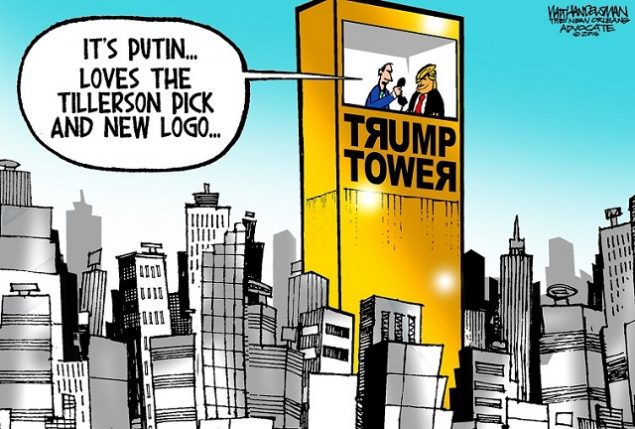 President Donald Trump is about to send Putin a grand gift wrapped with his message that he wants U.S. Forces out of Syria. This big news ruffled Falafel’s feathers. What are the consequences of such a decision Falafel asked himself? Unable to answer any of these questions, Falafel decided to take action by visiting the White House for an interview with the President. Falafel hears Trump Syria exit reason.

As usual, Trump met Falafel at the front door of the White House with his iPhone in hand. He was tweeting something.

Falafel: Mr. President, I believe you already told your followers the last time that I am not a refugee.

Trump: This time around, I am letting them know that you don’t like Barack Obama. This will calm them down a bit. They are boiling over for letting a Muslim into the White House.

Falafel: Mr. Trump, you made a remark yesterday that you were ready to leave Syria. What is the reason behind this decision?

Trump: As you know, I want to build a Trump Tower in Moscow. I am hoping Putin may see this gesture of goodwill as reason enough to let me build one.

Falafel: Mr. President, you realize that this will be considered as colluding with Russia. Using United States policies and interests to gain a personal commercial advantage.

Trump: I learned from the best, crooked Hillary. They come after me, they have to go after her too. They won’t.

Falafel: Defense and State Department disagree with your decision to exit Syria. What do you have to say to them?

Trump: I will invite Mattis and Pompeo to stay free at Trump Tower in Moscow once I build it. They will understand why then.

Falafel: Would our exit not help Iran in Syria gain more influence and traction?

Trump (looking surprised): Iran is in Syria? Nobody told me that.

Falafel: And what about ISIS? It may resurface from its underground hideouts.

Trump: I have a good solution for that. I asked Jim (Mattis) to fire indiscriminately on targets in Syria. ISIS will think twice before rearing its ugly head again.

Trump: Nobody is innocent in Syria. They are all terrorists. Even children. Putin told me so.

Falafel: What makes you think Putin, after our exit from Syria, might let you build a Trump Tower?

Trump: Oh, Falafel, you have asked the most important question. I don’t know for sure. I just have to keep trying.

Trump: Yes. Keep trying to please him until he gives me the permission. Why are you so thick headed today?

Falafel wrapped the interview. He felt that this White House is beholden to Putin until Trump builds his tower in Moscow. So does Putin know as well.