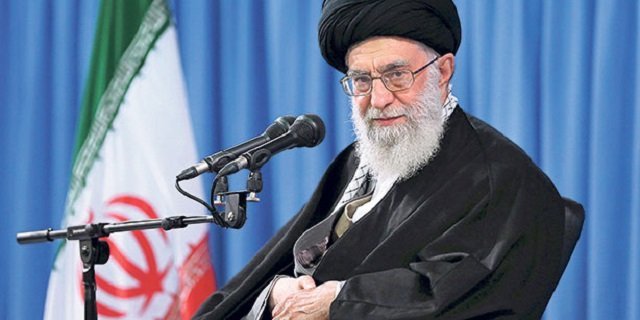 Interviewing Ali Khamenei, the top honcho terrorist in Iran, is one of the most impossible tasks. Somehow, however, Falafel was able to pull it off. Welcome to Islamic Iranium.

He arrived from Damascus on one of the 200 daily flights scheduled on beaten-up Tupolov Putin was happy to sell to Iran. Since seats were tight, he had to settle for sitting on top of a Shahab-3 missile the Assad regime returned to Iran to equip with sarin gas.

Upon arrival, Falafel was ushered into Khamenei’s modest residence the terrorist uses to show off his humble roots. His real residence, Falafel was told, would make Versailles look like a hut.

Falafel: Thank you Ayatollah for the interview. I would like to start by asking you about the Islamic Republic of Iran’s date for signing the Iran Deal.

Khamenei: My supreme being has recommended we change the name to the Islamic Republic of Iranium. It expresses better who we are and what is G*d’s message to us, which is to destroy Western civilization.

Falafel: This is breaking news. Has the Parliament adopted the name change?

Khamenei: Our caviar and pistachios industries are not bringing enough Moola. To become the premier exporter of newly discovered Uranium, we have to market ourselves properly.

Falafel: Are you not afraid this might affect Barack Obama domestically at home?

Khamenei: We spit upon and curse the ruler of the great Satan.

Falafel: How much Uranium has Iranium discovered?

Khamenei: This is a top secret question. Are you a spy for the Washington Post?

Falafel: How will you price Iranium’s Uranium and who are the first buyers?

Khamenei: Price is $150 billion Obama is paying us in hard Moola. First client is Hamas. The grotesque ruler of the great Satan insisted upon it.

Falafel: Why do you think Obama wants Hamas to get its hands on Uranium?

Falafel: We heard a rumor Valerie Jarrett met with you secretly. Is that true?

Khamenei: She did. After telling me she was a Communist, I kicked her big ugly butt out of Iranium all together.

You heard it here first. Iran is now Iranium. Uranium is the new export of Iran, not caviar or pistachios. Obama wants Hamas to own a nuclear bomb for his equilibrium to work. Valerie Jarrett met with Khamenei but was booted from Iranium for confessing her Communism.