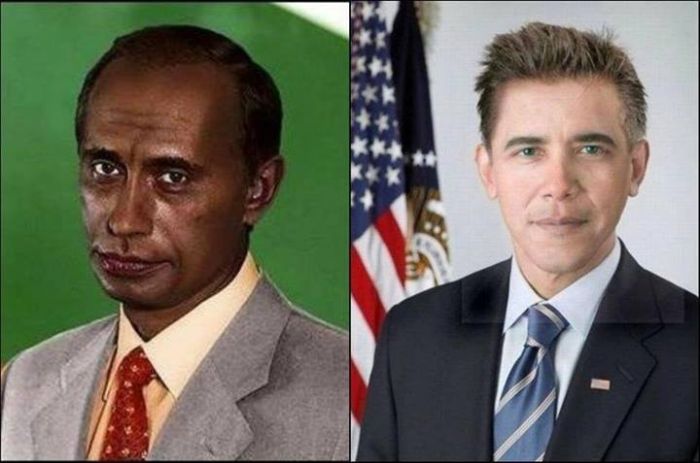 Obama and Putin Divulge Their Deep Secret to Falafel

Falafel was minding his own business when a Russian, with a heavy accent, called him from the Kremlin to let him know that he is needed urgently in 48 hours. The official sounded serious. He told him a Zil would be waiting for him at Sheremetyevo to bring him to the Kremlin. Falafel did not realize that this was going to be the interview when Obama and Putin divulge their deep secret to Falafel.

In the past, Falafel discounted such calls. After all, Putin was a nobody. Today, however, Barack Obama has, because of his stiff ideology, made Vladimir Putin his master, which in turn made this call quite important, and Falafel acted upon it promptly.

True enough, a black Zil reeking of cheap Vodka was waiting for him at the airport. Upon his arrival to the Kremlin, Falafel was ushered into a private office awaiting instructions.

Ten minutes later, Obama and Putin walk into the room laughing joyously. Falafel realized he is about to interview the two leaders together. That sent shocks down his spine. This is the scoop of his journalistic career.

Obama: “You look like you swallowed a black rabbit.”

Putin: “Before you start asking, we want to make an announcement to the world. Ready? Barack and I are half brothers. There you have it. Now ask away”

Falafel, still in the later stages of the first shock, began breathing heavily, seeking more oxygen for his brain.

Falafel: “Can you explain your statement Mr. President?”

Putin: “When Barack Sr. converted to Islam after his Zanzibar trip, he traveled to Georgia where he met my real mother Vera Putina and raped her. Barack and I are half brothers by the same father”

Falafel: “Are you saying that Barack Sr. was a rapist?”

Putin: “Apparently. This is why both Barack and I are very angry people. Our father raped my mother and beat his”

Barack: “We discovered it by accident. I hate Jews and Vladimir here hates Sunnis. This brought Assad into our lives who happen to hate both. When Vlad asked his mother Vera where his anger comes from, she told him about her rape by a black man who was visiting Georgia. Bingo, it all made sense. Long live Assad”

Putin:”Indeed. Long live the man that connected our dots”

Falafel: “You don’t even look alike. Is it possible it’s all a mistake?”

Putin: “DNA matched. Assad was so happy to hear that my mother was raped by a black man, he offered to test both our bloods at the exceptional hospital of Qardaha. It was Assad that told us we were half brothers. Ain’t this groovy?”

Falafel: “But Mr. President, I know the Qardaha hospital. All it does is deliver babies using midwives. They have only one doctor on its staff who, on the side, rapes Sunni women to spread Alawism. It has no DNA laboratory.”

Vlad and Putin looked at each other.

Putin:”That weasel assured me Barack Sr. was my real father.”

Obama:”So, does that mean I do not have a white brother? Darn it, Warren and George were so happy for me.”

Obama and Putin Divulge Their Deep Secret to Falafel