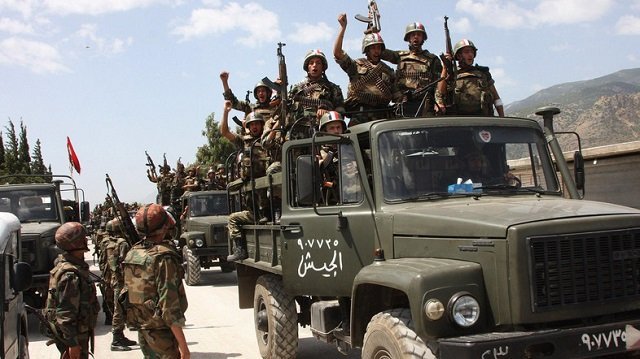 The source described the weapons as highly accurate and effective, adding that the army had started using them in recent weeks having been trained in their use in Syria in recent months.

The source said in response to a question about Russian military support.

“New weapons are being delivered, and new types of weapons. The Syrian army is being trained in the use of these weapons. In fact, the army has started using some of these (weapon) types. The weapons are highly effective and very accurate, and hit targets precisely. We can say they are all types of weapons – be it air or ground.”

Putin refurbishes Assad with new weapons, but they require a new army to man them. Assad’s army has been depleted after almost 5-years of fighting a potent insurgency.

Facing a manpower problem in the army, the Syrian government has lost ground this year in the northwest, the southwest and the center of the country to an array of groups including ISIS and other insurgents battling to topple President Bashar al-Assad.

U.S. officials said on Wednesday the they had identified a small number of Russian helicopters at a Syrian airfield, the latest addition to what Washington believes is a significant Russian military buildup in the country.

Is Obama concealing the extent of the Russian involvement in Syria for fear he may come under domestic pressure in the aftermath of the Iran Deal filibuster in Congress?

Assad’s army, on the other hand, needs to extol the power of its new weaponry to lift the morale of its troops.

One of the officials said four helicopters had been identified, including helicopter gunships, although it was not clear when the Russian helicopters had arrived there. Is Obama concealing the facts about Russian involvement?

Thus far in the conflict, Iran and its Lebanese ally Hezbollah have been the main source of military support for Damascus. Hezbollah has deployed directly in combat, while Iran has mobilized militias and sent military advisers.

Lebanese sources familiar with military and political developments in Syria have also previously told Reuters that Russians are taking part in military operations in the country.

For Obama, Chlorine Gas is Not a Weapon. It Is What White Folks Use in Their Swimming Pools
Hold Obama Liable on Iran Deal to Expand Iranian Terror
Mr President Can Syrians Borrow Some Gas Masks?
Slippery Barack Obama 976