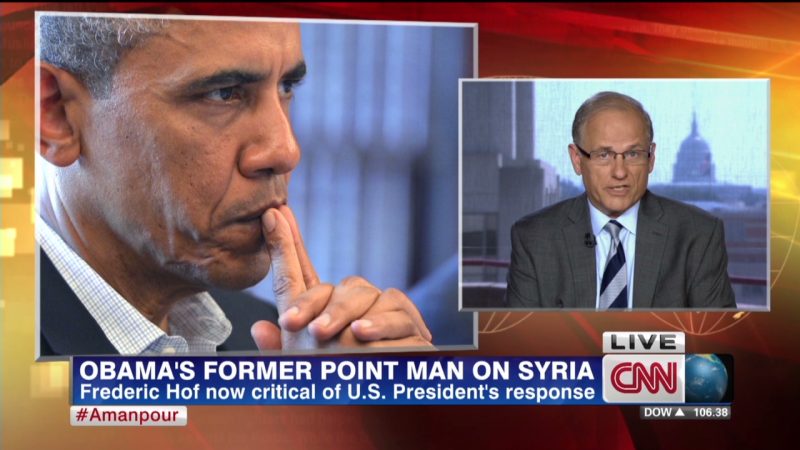 March 29, 2018 4:35 pm 0
Mr. Rhodes, there were no wrong sides in early 2011
For Obama, Chlorine Gas is Not a Weapon. It Is What White Folks Use in Their Swimming Pools
The Jew Hater Occupier

Ambassador Frederic C. Hof worked the Syria file in the State Department of the Obama Administration. He soon realized that Barack Obama was not serious about saving Syrian lives, protecting women and children from the atrocities of Assad, or even feigning the slightest empathy. So, he left to lead the Atlantic Council where he worked tirelessly to assist the Syrian people face the terror of Assad. Now, he departs the Council for greener pastures. Warm farewell Ambassador Frederic Hof.

In his own farewell note, Hof describes astutely the events that led from Obama to the Council. We say astutely because his words are like diplomatic daggers it is best for Barack Obama not to read. We loved them of course because every Syrian-American or Syrian feel the Obama era to be one of complicit criminality with the Assad regime. All Obama cared about was his own personal legacy. At the expense of 600,000 dead Syrians and close to six million refugees. We believe most Syrians will celebrate with a national holiday the day Obama departs our world. It will be the only national holiday of a country celebrating a departed soul.

Below is the full text of Ambassador Hof’s own goodbye he simply titled “Leaving”. Warm farewell Ambassador Frederic Hof.

When I joined the Atlantic Council’s Rafik Hariri Center in late 2012, I had one goal: to build a Syria program that could, from outside government, do that which I had failed to do on the inside. I wanted to persuade senior officials that a drifting Syria policy left unchanneled would facilitate human suffering on an industrial scale and serve the interests of those arrayed against the United States and its allies: Russia, Iran, Islamist extremists, and the lawless regime of Bashar al-Assad.

As I prepare now to leave a Center that I would eventually have the honor to serve as Director, I would summarize my Syria legacy as follows: Mission unaccomplished.

It will seem counterintuitive to many that someone would trade “senior official” status for a job in a “think tank” to exert more influence. But I had concluded in the late summer of 2012 that President Barack Obama’s words of a year earlier about Assad stepping aside were empty, and that my efforts in government to bring dead words to life were futile.

Instead of implementing what had sounded like the commander-in-chief’s directive, the State Department was saddled in August 2012 by the White House with a make-work, labor-intensive project cataloguing the countless things that would have to be in place for a post-Assad Syria to function. But how to get to post-Assad? The White House had shut down the sole interagency group examining options for achieving that end.

As I was composing my resignation letter, President Obama made his chemical red line statement. In my first post-governmental interview I expressed certainty, based on the president’s words, that any Assad regime use of chemical munitions would draw a quick and lethal American military response.

I had, for the second time, taken a Syria-related presidential statement seriously. In late 2011 I had told a Congressional committee that, in my view, the Assad regime was “a dead man walking.” I thought then that the “step aside” dictum represented the commander-in-chief’s intent, and that Mr. Obama took his own words seriously. He did not.  He confirmed the disconnect between word and deed in the weeks following the regime chemical atrocity of August 2013.

In retrospect my mission in government should have ended in March 2011, when Assad decided that the best way to deal with peaceful demonstrators protesting police brutality was to shoot, imprison, and torture them.

My job since April 2009, as a deputy to Special Envoy for Middle East Peace George Mitchell, was to build a foundation for Syrian-Israeli and eventually Israeli-Lebanese peace. Progress on the former seemed to be happening. Yet by using deadly force on his own citizens, Assad ended, perhaps forever, a process that might have recovered for Syria the territory lost by his Minister of Defense father in 1967.

When the full story of Syria’s betrayal by a family and its entourage is written, the decision of Assad to sink a potentially promising peace mediation will merit a chapter. My decision to stay on at State for another 18 months was, in retrospect, a mistake.

Moving to the Rafik Hariri Center and the Atlantic Council, on the other hand, is something I will never regret. Here there is a strong, non-partisan and non-ideological ethic centering on impact: trying to give busy officials implementable ideas and options to solve problems and advance the interests of the United States and its transatlantic allies.

For the balance of the Obama administration I would try to remember, in my Hariri Center work, what it had been like as an official trying to think great thoughts and devise practical actions while being overwhelmed with bureaucratic demands. I would not be merely critical of policies or offer platitudinous suggestions: I would offer implementable alternatives.

Alas, it did no good. President Obama would caricature external alternatives by creating and debating straw men: invented idiots calling for the invasion and occupation of Syria.

He would deal with internal dissent by taking officials through multi-step, worst-case, hypothetical scenarios of what might happen in the wake of any American attempt, no matter how modest, to complicate regime mass murder. The ‘logical’ result would inevitably involve something between World War III and an open-ended, treasury-draining American commitment.

The result of these exercises in self-disarmament would be Vladimir Putin and his ilk concluding that American power was, as a practical matter, equal to Palau’s; Ukraine could be dismembered, NATO allies threatened, and the United States itself harassed with impunity. He did not mean to do it, but Barack Obama’s performance in Syria produced global destabilization.

It was not until the fall of 2014 when it became clear what was motivating him. The Wall Street Journal’s Jay Solomon reported on a “secret” letter from the president to Iran’s Supreme Leader, Ali Khamenei, in which (among other things) Mr. Obama reportedly assured Khamenei that American military power aimed at ISIS (ISIL, Islamic State, Daesh) in Syria would not target the Assad regime. But why give Khamenei such a reckless assurance, one that would surely be relayed to Assad, enhancing his already massive sense of impunity, with deadly consequences for Syrian civilians?

The answer was that Mr. Obama wanted, more than anything else, a nuclear deal with Iran. This would be his foreign policy legacy jewel in the crown. This would supposedly bring Iran in from the cold and ultimately transform the Islamic Republic from purveyor of state terror to good neighbor. Such was the mindset that considered Syrian lives expendable for a higher cause.

Tehran was indeed dependent on Bashar al-Assad to provide strategic depth for and support to its own jewel in the crown: Lebanon’s Hezbollah. Barack Obama feared that protecting Syrian civilians could anger Iran and cause it to walk away from nuclear talks. From his point of view, the prices paid by Syrians, Syria’s neighbors, and American allies in the region and beyond were worth the grand prize. It seems never to have occurred to him that Iran wanted the nuclear deal for its own reasons, and did not require being appeased in Syria. I was told by senior Iranian ex-officials in track II discussions that they were stunned and gratified by American passivity in Syria.

The new administration is not, to say the least, inclined to sacrifice Syrian children and their parents to preserve the nuclear agreement finally arrived at in July 2015. Indeed, it responded militarily to yet another Assad regime nerve agent attack in April 2017, a response that created neither World War III nor the invasion and occupation of Syria.

Now the administration is wrestling with a spin-off question: what to do about an Assad regime that sees a proclaimed red line against potent chemicals as a green light and permission slip for using everything else against civilians? How should the United States deal with collective punishment atrocities that give aid and comfort to Islamist extremists around the world?

The Trump administration is infinitely more open to considering policy alternatives than was its predecessor. Yet in Washington’s hyper-partisan state, some who fully understood and opposed the catastrophic shortcomings of the Obama approach to Syria reflexively criticize anything the new administration does or considers doing to end the Assad regime’s free ride for civilian slaughter. Letting Syrian civilians pay the price for self-serving political motives may never go out of style in some Western political circles.

As I say goodbye to the finest team with which I have ever worked, I remain hopeful that American leaders will, at last, arrive at a Syria policy worthy of the United States.

Such a policy would stabilize a post-ISIS Syria east of the Euphrates River in a way that would encourage the emergence of a Syrian governmental alternative to a crime family and its murderous entourage.

Such a policy would, if necessary, apply modest military measures to complicate civilian mass murder, and not only when the murder weapon is sarin nerve agent.

Such a policy would treat Iran and al-Qaeda in Syria as two sides of the same extremist, Islamist coin.

And such a policy, while being open to any genuine offer of Russian cooperation in Syria, would recognize that (in the words of Director of National Intelligence Dan Coats) “Frankly, the United States is under attack.” He was referring to Russia.

In the end, however, I take leave of friends and colleagues knowing that I did not accomplish during my Atlantic Council tenure that which I set out to do in late 2012. For this I am very sorry. But this effort has become a life’s work. It will not end.