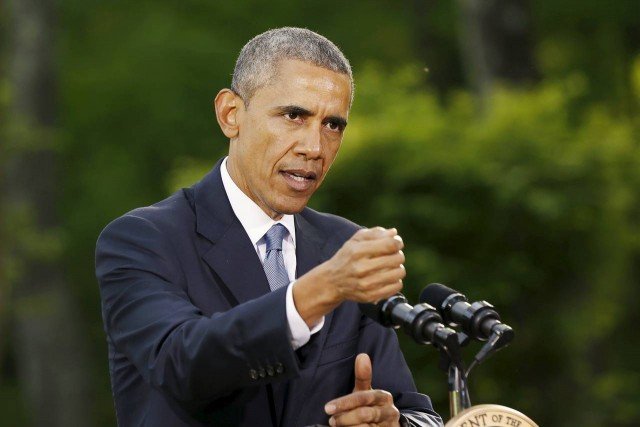 Much More Is Needed to Stop Iran From Getting the Bomb

May 18, 2015 9:56 am 0
US monitoring reports Russia has stepped up Syria presence
The Dumb Obamacans
Washington Concerned Over Saudi-Turkish Thaw

Obama will reluctantly sign a bill giving Congress more say over a final deal. Here’s what we should be looking for.

The Iran Nuclear Agreement Review Act is now on its way to the White House for a reluctant signature by President Obama. He was forced to accept, by overwhelming votes in both chambers, Congress’s constitutional role in reviewing any nuclear deal with Iran and the lifting of any congressionally imposed sanctions. Now the hardest work begins.

The president must either negotiate an agreement that will permanently prevent an untrustworthy Iranian regime from acquiring nuclear weapons—or walk away. If he instead commits to a plan that will lead to a nuclear Iran, Congress must stop it.

Iran is the greatest sponsor of terrorism in the Middle East and the world. It is openly committed to the destruction of Israel. It sits at the nexus of nearly every major global threat: the Syrian crisis, the rise of ISIS, the resurgence of al Qaeda, the crisis in Iraq that threatens gains won with U.S. blood, the chaos in Yemen that is adding to the threat of an all-out regional war, and renewed weapons trade with Russia’s Vladimir Putin.

To allow this pariah nation to acquire nuclear weapons and the ability to deploy them against us and our allies—and to share them with radical Islamic organizations—would constitute an incalculable threat to our national security and an existential threat to Israel. It would set off a nuclear-arms race that would virtually guarantee a regional war with global implications.

Alarmingly, our negotiators and the Iranians have offered wildly differing interpretations of the negotiated framework. On every principle, Iran insists it will never accept our terms. Serious questions remain about how this deal can prevent a nuclear Iran.

Will international sanctions be lifted before proof that Iran is in compliance? How and when would sanctions be restored if there are violations? Can we have a good faith agreement with a regime that for decades has lied and cheated, and still has never come clean about its past efforts to weaponize nuclear technology? Will Iran be required to demonstrate changed behavior—with respect to its nuclear ambitions and its sponsorship of terrorism?

I am proposing eight principles to ensure we get the right answers and achieve a sound, enforceable deal.

• Iran must not be allowed an enrichment capability greater than the practical needs to supply one commercial reactor. The Iranians should have access to peaceful nuclear power, but the infrastructure should be aligned to support the needs of a single nuclear reactor.

• Closure of all hardened and formerly secret sites. Iran must come clean on all outstanding issues raised by the International Atomic Energy Agency (IAEA), particularly concerning the possible military dimensions of Iran’s civilian nuclear program. The history of Iran’s nuclear program has been marked by deception. Sites like Fordow have no role in an Iranian civilian program. Iran must account for the full inventory of centrifuges, production facilities for components, the total number of components, assembly workshops and storage depots for centrifuges.

• Anytime, anywhere inspections of all Iranian military and nonmilitary facilities. Iran shouldn’t have veto power over when inspectors visit its facilities, including the ability of independent parties to monitor and report on Iran’s compliance.

• Sanctions relief and access to funds currently in escrow must be phased in and fully conditioned on IAEA certification that Iran is in full compliance and has demonstrated sustained compliance over time. Allowing Iran access to these tens of billions of dollars in funds before it has fulfilled its portion of the agreement is unacceptable.

• There must be an explicit process for the “snapback” re-imposition of sanctions if Iran violates the deal. It took years to impose the sanctions, which brought Iran to the negotiating table.

• Iran must not be allowed to conduct research and development on advanced centrifuges. Mastery of this technology will allow Iran to reduce its breakout time toward a nuclear weapon.

• Certification by the president that, before any restrictions on Iran’s nuclear program are lifted, Iran has changed its aggressive behavior in the region and no longer meets the qualifications to be designated a state sponsor of terrorism.

These eight principles have bipartisan support and largely reflect President Obama’s negotiating position at the start of the process (demonstrating how far he has strayed from his original intentions). Adhering to these eight principles will ensure that Iran never acquires nuclear weapons or has the means to spread nuclear technology to radical Islamic groups.

Above all, they will reassert American leadership in the Middle East, and preserve our national security, and the security of Israel and other allies in the region. Any deal that does not adhere to them will fail, with dire consequences for global security.

Mr. Graham, a Republican, is a U.S. senator from South Carolina.

Much More Is Needed to Stop Iran From Getting the Bomb

Senator Lindsey Graham Gets It on Syria
Why Won’t Obama Help My Syrian Christian Family?
Shia Half Moon after the Shia Crescent
Slippery Barack Obama 954