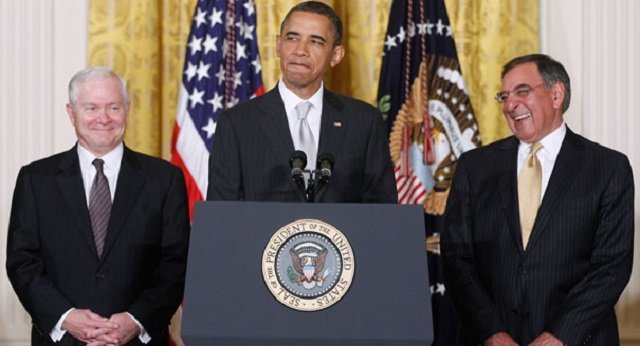 Gates and Panetta Critical of Obama on Syria

September 18, 2013 5:50 pm 0
When Community Organizers Claim To Be Leaders
The La-La Land Diplomacy of Obama
After Lebanon, Rockets Land

Source: The New York Times – By Thom Shanker and Lauren D’Avolio (Gates and Panetta Critical of Obama on Syria)

President Obama’s first two defense secretaries publicly questioned the administration’s handling of the Syrian crisis on Tuesday night and expressed skepticism about whether Russia can broker a deal to remove Syria’s chemical weapons.

In a joint appearance in Dallas, both former Pentagon chiefs, Robert M. Gates and Leon E. Panetta, were critical of Mr. Obama for asking Congress to authorize the use of force against Syria in retaliation over its use of chemical weapons. But they disagreed on whether military action would be an effective response. Mr. Gates said Mr. Obama’s proposed military strike was a mistake, while Mr. Panetta said it was a mistake not to carry out an attack.

“My bottom line is that I believe that to blow a bunch of stuff up over a couple days, to underscore or validate a point or a principle, is not a strategy,” Mr. Gates said during a forum at Southern Methodist University. “If we launch a military attack, in the eyes of a lot of people we become the villain instead of Assad,” he added, referring to President Bashar al-Assad of Syria.

Mr. Gates, the only cabinet member from the administration of George W. Bush whom Mr. Obama asked to stay, said missile strikes on Syria “would be throwing gasoline on a very complex fire in the Middle East.”

“Haven’t Iraq, Afghanistan and Libya taught us something about the unintended consequences of military action once it’s launched?” Mr. Gates said.

Mr. Panetta, also speaking at the forum, said the president should have kept his word after he had pledged action if Syria used chemical weapons.

“When the president of the United States draws a red line, the credibility of this country is dependent on him backing up his word,” Mr. Panetta said.

“Once the president came to that conclusion, then he should have directed limited action, going after Assad, to make very clear to the world that when we draw a line and we give our word,” then “we back it up,” Mr. Panetta said.

Mr. Gates and Mr. Panetta made their most extensive comments on current national security policy — and certainly their most critical statements on policies of the administration they both served — since leaving public service. Both former secretaries have announced plans to publish memoirs expected to shine more light on the internal policy debates of their tenures. Neither expressed a specific reason for breaking their silence on the Obama administration’s decisions Tuesday night.

Asked about the comments at a news conference on Wednesday, the current defense secretary, Chuck Hagel, said he had “the greatest respect” for his two predecessors, but added, “Obviously, I don’t agree with their perspectives.”

Another former high-ranking Obama administration official, Michael J. Morell, who recently retired as the deputy director of the C.I.A., also expressed skepticism about the negotiations brokered by Russia.

“I think this is the Syrians playing for time,” Mr. Morell told Foreign Policymagazine in an interview published Tuesday on its Web site. “I do not believe that they would seriously consider giving up their chemical weapons.”

Mr. Gates said he doubted whether President Vladimir V. Putin of Russia was sincere in his efforts to broker a deal, and said he was skeptical that the Syrian government would disarm. He said it was absurd that Syria needed days or weeks to identify the location and size of its chemical weapons arsenal, and he suggested that the timetable should be an ultimatum of 48 hours.

When asked whether the West should trust Mr. Putin, Mr. Gates said, “Are you kidding me?”

He advocated identifying credible partners within the Syrian opposition and increasing support, including weapons — but not surface-to-air missiles, which could be seized by militants for terrorist acts against civilian aviation.

He also supported a strategy of sanctions that labeled members of the Assad government as war criminals, with the threat of arrest if they left Syria, and suggested sanctions on Assad family members living or studying overseas, including on their financial holdings. Such pressure might prompt some in the inner circle to negotiate an end to the civil war, Mr. Gates said.

Although Mr. Gates said that any unilateral military action against Syria would be a mistake, he also said it was unwise for the president to have sought Congressional authorization to use force, because of the risk to presidential prestige if he was rebuffed.

Under questioning from the moderator, David Gergen, who advised four presidents and is now on the faculty at the Kennedy School of Government at Harvard, both former secretaries said that American credibility on Syria was essential to enduring efforts to prevent Iran from building nuclear weapons.

“Iran is paying very close attention to what we’re doing,” Mr. Panetta said. “There’s no question in my mind they’re looking at the situation, and what they are seeing right now is an element of weakness.”

Mr. Panetta said that the president “has to retain the responsibility and the authority on this issue,” and that it was wrong to “subcontract” the decision to Congress. “Mr. President, this Congress has a hard time agreeing as to what the time of day is,” he said.

Gates and Panetta Critical of Obama on Syria