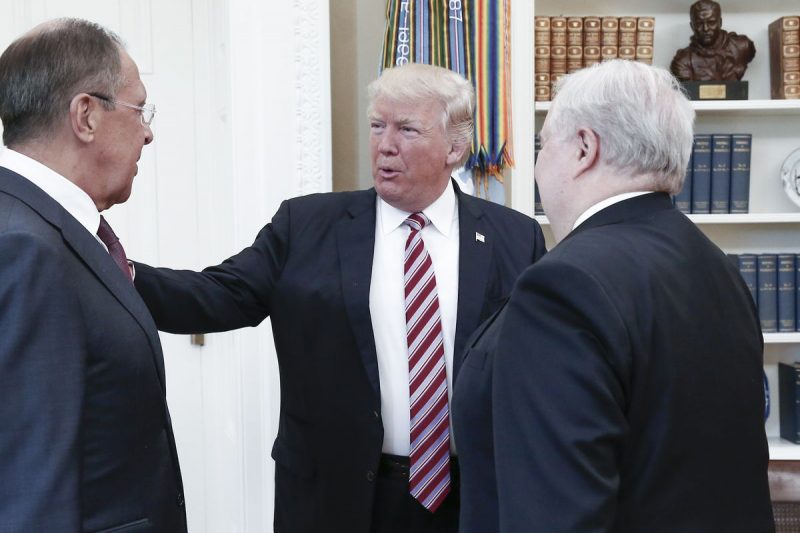 Today, Falafel interviews Russian Ambassador Kislyak with regard to the latest controversy of our airhead president disclosing “Top Secret” information to Foreign Minister Sergei Lavrov and Ambassador Sergei Kislyak. Falafel wants to get the bottom of this mess.

Since Ambassador Kislyak has left his U.S. post on July 22, 2017, it has been difficult to gauge whether his departure may be related to the Mueller investigation. Nonetheless, after his meeting with airhead Donald Trump, Falafel was able to corner the Ambassador in the swimming pool of the $90 a night of the Holiday Inn on Rhode Island Avenue.

The Ambassador was wearing a Speedo equipped with a secret internal steroids delivery system Putin is testing on his diplomats in preparation for the summer Olympics.

Falafel: Good afternoon Ambassador. How did your meeting with our president go?

Kislyak: I was hoping you find me here. Excellent meeting with your supreme leader, as usual.

Falafel: Is it true he divulged top secret information to you and Lavrov?

Kislyak: ‘divulged’ is the wrong word. It was more like he ‘volunteered’ voluntarily.

Falafel: So, it’s true then?

Kislyak: To be honest with you Falafel, your president has a big personality but the smallest of brains. We could have asked him anything and he would have obliged us. In fact, Sergei and I regretted not asking him about the nuclear codes just to test his loyalty to our president.

Falafel: Did he ‘volunteer’ any other information?

Kislyak: No, but he was lamenting how easy for Russian men to grope Russian women without any consequences. You president is very touchy feely and Sergei and I were concerned he may grope us by mistake.

Falafel: What conversation preceded the ‘volunteering’ of information?

Kislyak: He was complaining about his son-in-law Jared Kushner.

Kislyak: He called him using New York slang insults I am not familiar with. Sergei and I think your airhead president is a closet Nazi. Did his administration not just vote against a U.N. Resolution to condemn Nazism.

Falafel: But Trump would never marry his daughter to Kushner if he was a Nazi.

Kislyak: In Russia, we think he would marry her to the devil if that meant he has access to more money.

Kislyak: Yes, but our president could care less about yours. We stroke your president’s ego to get what we want, which has been a lot.

Kislyak: You did not hear this one from me, but your airhead president has built a bridge between our countries delivering us valuable information about your intelligence services. He is our dream US president.

Falafel: Why would he do that?

Kislyak: Because he still cannot believe he has so much power; he has these urges to show it off. The man is insecure, what can I tell you.

Suddenly, Kislyak got up and left. Looking back, Falafel could see Sergei Lavrov with a very unhappy face.