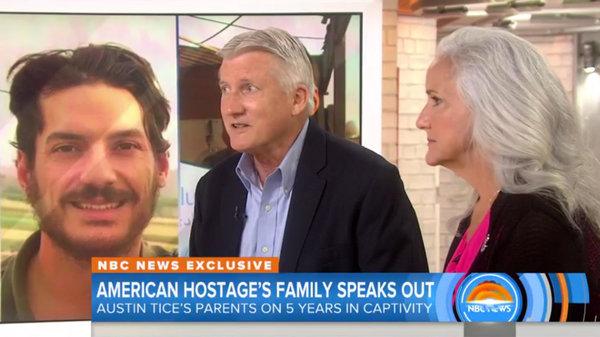 The Austin Tice Tragic Saga Will Eventually End If …

The Washington Post reported today that his family is holding a press conference at the Press Club in Washington DC to bring attention to the Austin Tice tragic saga, and to continue its push towards his release. Every American should send this family their heart-felt wishes for the safe return of their son. Do tweet them at @FreeAustinTice for words of encouragement and compassion. They need us all to stand by their side.

For those who are not yet fully aware of the full story, the Assad regime kidnapped Austin Tice exactly six years ago. At the time, the regime was under immense pressure from Syrians and foreigners fighting to overthrow Assad. By kidnapping Austin, Assad wanted to trade Austin’s life for his rule if his regime fell apart. He is but a bargaining chip.

As fate would have it, and as President Barack Obama ignored the pleas of his family to pressure Assad to bring the young and brilliant journalist home, the regime survived. Assad has, on the basis of the kidnapping, no reason to hold him.

The Austin Tice Tragic Saga Will Eventually End If …

Kidnappers, who also parade as mass murderers, tend to dictate the reasons and the rules. Today Assad still holds Austin Tice to secure billions of dollars in reconstruction funds he wants the Americans he accuses of starting the uprising in March 2011 to divvy up. Don’t try and convince this sociopath that Syrians revolted because of his torture chambers; or because of his killing spree against innocent civilians. In his mind, it was America and Israel. Period. Don’t argue with his birdbrain.

Let us say Assad gets his wish. He gets some international funds, down the road, with American State Department help. Will the Austin Tice tragic saga end? Unlikely. The sociopath will re-calibrate and seek other demands to release Tice. With sociopaths like Assad, who now believes he won the war against America, there is no reason to free Austin Tice anytime soon. It is his golden goose laying him a path of gold as long as he is not pressured to release him.

It’s All About Leverage

The United States must find leverage against Assad it can use to free Austin. American leverage comes in two flavors. Its military might and its economic might. Either one of those, if applied in the right context with determination, will free Austin.

We have, in the past, been a proponent of a military solution in which the determination of a U.S. President and our military machine might succeed if we hurt Assad where it matters the most. Barack Obama was a weak president to consider a military option, or any other option for that matter. Cowards tend to argue for strategic patience to escape their responsibilities. Trump is not Obama.

The Austin Tice tragic saga will eventually end if President Trump secretly threatens Assad by giving him a face-saving exit and a time frame to release him. If that does not work, the President should take to Twitter and demands his immediate release; or else, he will start bombing every official building in Damascus. The President should add that if Austin is harmed in anyway, he will make sure that he won’t rest until the Assad family meets the same fate. To include Assad’s son Hafez. Only when Austin’s life is equal to Assad’s son life, would we see any positive results.

It is all about leverage. The President understands this very well.

Yes, the above solution is extreme. But this regime understands but the extreme. We would be fooling ourselves if we believed kind words, or patient diplomacy, will free Austin. We know this regime too well to make this statement. Assad will continue to have more demands.

A second option would be for the President to ask Vladimir Putin for help to pressure Assad. If Putin ignores him, make Russia responsible, as Assad’s patron, by turning Austin’s case into a worldwide news event. Make his fate the talk of global news organizations backed by some stiff pressure against Russia. Let Russia find a way to free Austin. Putin would see that his heroism might pay big dividends on the world opinion stage.

In fact, both leaders might use the end of Austin Tice tragic saga as an excuse for rapprochement between the two countries. Let’s see if the Democrats object. (Putting aside our own enmity towards Putin, Austin must return home to his family).

What are the chances of either happening? Zero to nil. Why? Because policymakers, unfortunately, consider the bigger picture when debating the fate of one American soul.

Having said that, if Melania Trump whispers in Donald’s ear, he is crazy enough to start the process. If he does and succeeds, how could the world not respect the President for standing up to a bully to free one young American man? It will set a very high bar for any future dictator or rogue regime to think twice before kidnapping Americans for ransom.

Whatever happens, we wish the Tice family all the best as they struggle to bring their son home.

The Austin Tice Saga Will Eventually End If …