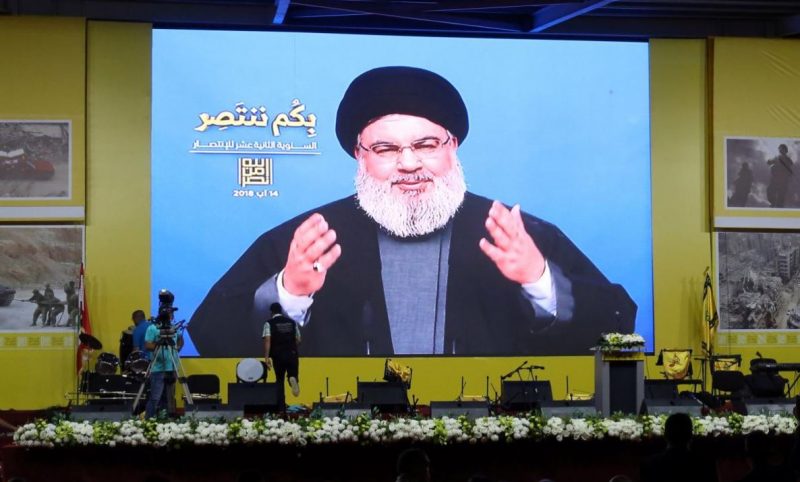 The leader of Lebanon’s Iran-backed Hezbollah, Hassan Nasrallah, said on Tuesday his group was stronger than ever and would “very soon” celebrate victory in Syria, where it has been killing Islamists and civilians alike. A sign that Iranian backed elements distressed by the new American sanctions are beginning to appear. The vicious rumors floating in Lebanon has driven Hezbollah to respond.

Nasrallah spoke on live television to mark the anniversary of a 2006 war it fought with Israel. Nasrallah claimed:

The resistance in Lebanon today, in its possession of weapons and equipment and capabilities and members and cadres and ability and expertise and experience, and also of faith and determination and courage and will, is stronger than at any time since its launch in the region.

The more nouns and adjectives Nasrallah remunerated, the more scared Hezbollah appears to be. It shows that Iranian backed elements distressed by the new American sanctions are having their toll.

The new U.S. sanctions, to take effect in November, will, at least, halve Iranian income from sale of its oil. Experts expect Iran to suffer losses from income of over 365 milling barrels a year. At $70 a barrel for the OPEC basket, that’s in excess of $25 billion annually. For fiscal year 2018-2019, Iran’s budget is expected to reach $350 billion collected mainly through floating bonds (under sanctions), oil sales (under sanctions), and taxes.

This is why Nasrallah was flexing his hollow muscles on live national television. A sign that Iranian backed elements are distressed by new American sanctions against their benefactor in Tehran. Hezbollah is fully aware of the impact this will have on its own revenues to sustain its terrorist capabilities.

Hezbollah has relied on Tehran and its own clandestine drugs and money laundering operations to sustain its existence. During the Obama years, the President protected Hezbollah’s illegal activities as a favor to Iran. Hezbollah stands to lose much of that income as U.S. authorities clamp down on its global drugs trade.

Israel Keeps the Pressure Up

Israel has repeatedly struck Hezbollah in Syria, where the group and its Iranian ally have played a key military role in fighting alongside Assad’s forces, backed by massive Russian air power.

Assad now holds most of Syria, although a swathe of the northwest remains in rebel hands and U.S.-backed Kurdish forces control the quarter of the country east of the Euphrates river.

Israel has told Iran it must quit Syria, and said last year it had carried out air strikes there to stop Iranian weapons shipments to Hezbollah.

Concerns about an escalation with Israel rose sharply in May. At the time, Israel said it launched its heaviest barrage at Iranian targets inside the country.