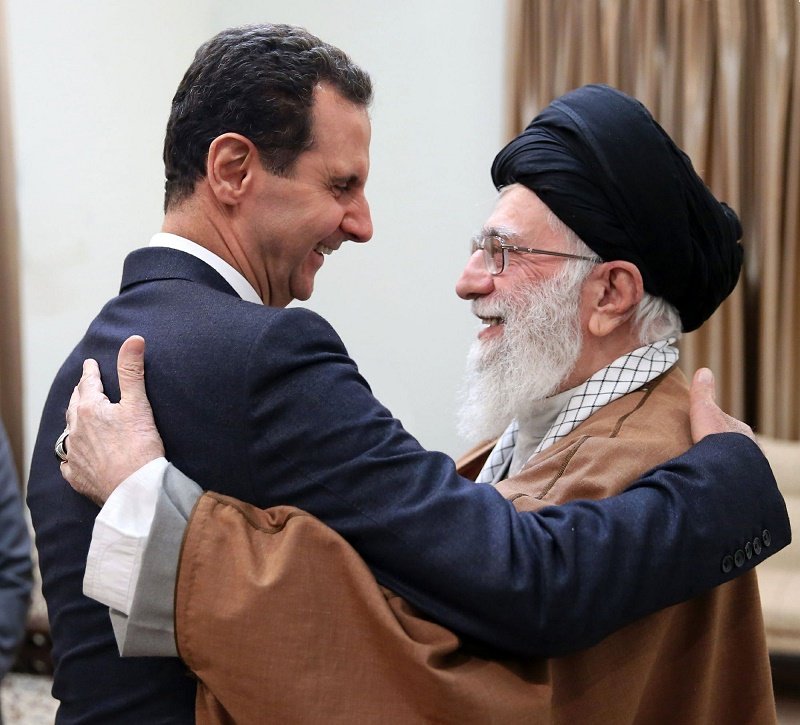 February 26, 2019 12:38 am 0
Senator Graham Called for Establishing a No-Fly Zone over Idlib
Dramatic rescue of baby buried in rubble in Syria
Go Ahead President Obama, Make Jihadists in Syria

Chemical Assad made an unannounced trip to Iran, where he met with the supremo leader and other top officials. According to state media, Assad discussed the planned U.S. troop withdrawal and Turkey’s buffer zone in northern Syria. That’s the official line. The non-official one goes along this tract: Chemical Assad met Khamenei to coordinate terrorizing US troops and gassing civilians in Idlib.

Chemical Assad met with Supremo All Knowing Ayatollah Ali Khamenei and President Hassan Rouhani on the rare trip abroad — his third since the civil war broke out in 2011. The other two trips were to Russia. Assad never announces his trips abroad for fear of a coup at home.

Tehran has given the Syrian government billions of dollars in aid and sent Iran-backed fighters to terrorize civilians alongside his forces — assistance that, along with Russian air power, has helped turn the tide in Assad’s favor.

DO YOU LOVE ME? BECAUSE I LOVE YOU

Syrian and Iranian media released photos showing Assad warmly cuddling Khamenei. Neither announced the visit beforehand, and both countries made it public late Monday. Only after Chemical Assad returned to Syria.

Iran’s semi-official Fars news agency said Khamenei told the visiting Assad that “the buffer zone that Americans are after in Syria is among dangerous plots that should be rejected,”. He added that the U.S. plan to maintain a presence in Syria “is another sample of their designs.”

This is code for “We will terrorize US troops”. Chemical Assad met Khamenei to coordinate future terror.

U.S. President Donald Trump announced in December that all American forces would leave Syria; but he recently backtracked in the face of intense criticism. Trump finally decided about 200 soldiers would remain indefinitely to help keep the peace alongside Syrian partners and prevent a resurgence of the Islamic State group.

U.S. officials said Trump’s decision authorizing a small number of U.S. troops to stay is a key step in creating a larger multinational observer force that would monitor a so-called safe zone along Syria’s border with Turkey. The buffer zone is meant to prevent clashes between Turkey and U.S.-backed Kurdish forces. It is also aimed at preventing Assad’s forces and Iran-backed fighters from seizing more territory.

Syrian officials have blasted Turkey’s plans for such a safe zone, saying both Turkish and U.S. troops are occupiers. This is why Chemical Assad met Khamenei. In order to coordinate future terror activities to force Trump to remove US troops from Syria.

Assad accused the U.S. and its regional allies like Saudi Arabia of creating rifts among various religious and ethnic groups in Syria.

This is quite rich coming from a man who butchered over 600,000 Sunni Muslims and ethnically cleansed Syria of some 6 million of its population with help from Iran.

Khamenei said Iran is “proud” of the assistance it offers to Syria, Fars reported. To include hunting down starving women and children.

Syria’s conflict began almost exactly eight years ago. The Syrian Revolution aimed to free the Syrian people from a brutal regime torturing and killing for over four decades.

The protests prompted a deadly response from Syrian security forces, which led to the emergence of an insurgency. To persuade the West his alternative is their enemy, Assad freed extremist Muslims from his jails and helped them create ISIS.

The visit to Iran comes a day before a trip by Israeli Prime Minister Benjamin Netanyahu to Russia for talks expected to focus on Iran’s role in Syria. Israel has said it will not tolerate a permanent Iranian military presence in Syria. Since then, it has carried out scores of airstrikes against Iran-linked targets there.