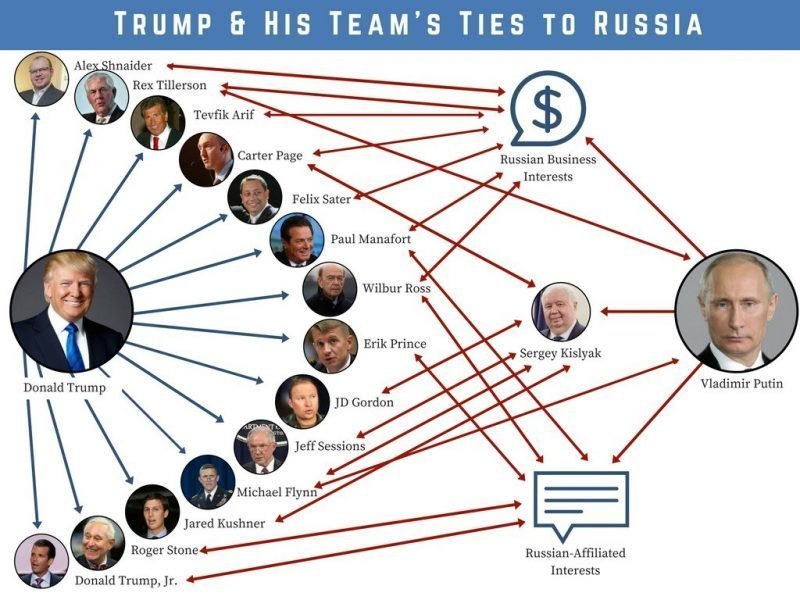 The Russian Government, under Vladimir Putin, exploited the social media platforms in 2016 to divide and tear this country apart using social issues such as race relations as weapons against us.  That was the first step. Putin installing Trump second step to destroying America from within.

While the United States has porous borders that require attention both at the physical and the legislature levels (Our immigration laws are antiquated and defunct), it does not warrant calling for a National Emergency. When the Democrats gain control of the White House, a Democrat President could declare a National Emergency following any school mass killing to control guns once and for all. What would that do to America? Divide us even further, and possibly pegs Americans against their own government.

Trump is setting a dangerous precedent that could only spell more divisions and more trouble for this nation ahead.

PRESSURING EVERYONE TO DROP THE RUSSIAN INVESTIGATION

Trump has, since the Russian probe into Putin’s meddling in the 2016 elections, attempted every possible venue to block that investigation. First, he fired F.B.I Director Comey. Then he fired A.G. Sessions. He even tried to fire Robert Mueller.

Furthermore, he successfully recruited two GOP Senators, Rep. Devin Nunes (R-CA) and Sen. Richard Burr (R-NC), to douse the investigation with cold water. Thus dividing the GOP into “for” and “against” the Russian probe.Trump obstruction of justice attempts are well documented. Overall, Trump used Twitter to attack the Russian investigation over 1,100 times.

All his actions lead us to this new path Trump is trail-blazing, which is totally new to American politics. The trail leads to an authoritarian modes of behavior that are very foreign to our democracy. Why? Because it is a sure way to weaken our powerful institutions from within.

DIVIDING AMERICA FROM HER ALLIES

While meeting with Russian foreign minister Lavrov and Ambassador to the United States Kislyak, Trump divulged Israeli secrets to a foe, which helped the Russian roadmap the methods and the spies behind the information. By divulging the information, Trump divided America from its natural allies in the West. Who would trust America with their secrets now? With one loose tongue, Trump jeopardized our intelligence gathering and sharing involving our allies.

Abandoning Syria means Trump has abandoned the region to Vladimir Putin. While Barack Obama also abandoned Syria to Putin, the latter adopted the Syrian policy because of his progressive, far left leaning, non interventionist mindset. Trump, on the other hand, is gifting the region to Putin to weaken this country and divide its leadership from within as it has done recently.

In another article, we wrote how Trump surrounded himself with Russian operatives. Had Putin got away with his meddling, these were the actors to implement, willfully or unwillfully, American destruction from within by steering Trump when he veers off track. Had they been at the helm today, Trump’s actions would be far more lethal and far more destructive to America’s institutions.

Of late, Mohammad bin Salman and Vladimir Putin have been seeing eye-to-eye on many fronts besides oil. This Saudi rapprochement helps explain why Donald Trump refused to condemn Mohammad bin Salman killing of journalist Jamal Khashoggi even though the CIA publicly announced MbS ordered the murder. This issue has divided Congress with many GOP and Democrats taking a tougher stand against Saudi Arabia. On this issue, our intelligence institutions are at a loss whether to air their grievances publicly, which will demonstrate divisions, or keep their concerns internal.

From the Justice Department to Veterans Affairs, vast swaths of the government have top positions filled by officials serving in an acting capacity – or no one at all. More than two years into President Donald Trump’s term, he has an acting chief of staff, attorney general, defense secretary, interior secretary, Office of Management and Budget director and Environmental Protection Agency chief.

Vacancies weaken our government to provide services to its constituents. Who benefits from a weakened American government but Putin himself? Putin installing Trump second step to destroying America.

ENEMY OF THE PEOPLE

Trump declared that our media is “the enemy of the people”, which the Soviet Union relied upon heavily to combat freedom.

The FAKE NEWS media (failing @nytimes, @NBCNews, @ABC, @CBS, @CNN) is not my enemy, it is the enemy of the American People!

A weakened media weakens America. Trump is not only dividing our country, but also weakening one of its anchoring institutions providing the public with important information about the travails of our democracy. If Putin was America’s president, he would sell the same concept.

There are many stupid voters who believe just because Trump looks like them, he is one of them. Then, there are Trump supporters who are born dumb. Darwin still working through his natural selection. Of late, we have also seen smart Trump supporters who refuse to see the obvious. They are so enamored with his positions and policies feeding temporary hogwash (i.e. Executive Orders) that they have turned a blind eye to what is real and what Trump is doing to our country.

We cannot help the first two groups. But the latter one, we ask them to wake the hell up from their slumber.